It’s 4:51 in the morning and I wake up, panicked, with the hamster wheel in my brain going full tilt. I am meditating. And by meditating I mean watching Law and Order, obviously. 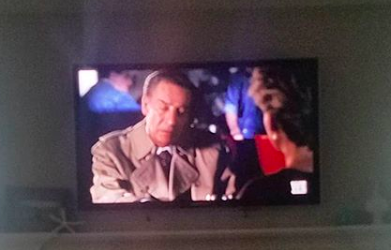 The good thing about Law and Order is that it is always on. Somewhere, some channel – worst case scenario, On Demand – but it almost never comes to that. If you scroll long enough you are sure to find some iteration of L&O in the hinterlands of basic cable.

Favorite has become a meditator. He’s taken to it like a fish to water. It shouldn’t surprise me. Sleep is his superpower. He is one of those people who says, “I’m going to bed. Goodnight.” then he kisses me, closes his eyes, and IS ASLEEP.

I say, “I’m going to sleep,” and then I stare at the ceiling wondering how I am going to handle all the things I find overwhelming, worrying about things I cannot control. Sometimes I quiet my mind by watching House Hunters. That works until I become filled with rage at the prospective homeowners at their unrealistic wish list or their gratuitous use of the word spacious. So, about 7 minutes.

Quieting my mind has always been difficult for me. Someone told me that prayer is talking to God and meditation is listening. Framed that way, it makes sense that I tend to prefer prayer. I’m a little chatty. I am a good listener when I need to be. Better than I used to be. Progress, not perfection.

I’ve begun to challenge myself in little ways. I am a foot jiggler. Being still, really still, used to be impossible for me. Nowadays, when I find myself moving unnecessarily, especially in a meeting or during a conversation, I force myself to be completely still. It’s harder than it sounds.

Anyway, when I wake in the middle of the night, worried about all the things – and right now I am worried about all the things – I immediately seek out Law and Order. It’s meditative for me in the sense that it engages my brain just enough to still it. It doesn’t require anything of me. There’s no suspense. I’ve seen virtually every episode, especially of the original. Even if I don’t remember every detail of every episode, I know enough. I know if Henry Winkler or John Ritter or any other well know/beloved TV actor shows up in the first 10 minutes as a grieving spouse or a bewildered friend, they totally did it. Lock ’em up. There is an inverse relationship between an actor’s fame and their L&O character’s innocence. Dick Wolf isn’t paying Joe Piscopo dollars for a walk-on role.

Ok, maybe that was a bad example.

The best version was, of course, the Lenny Briscoe era. There is something so incredibly soothing about Jerry Orbach. For one thing, he looks an awful lot like my mom’s dad. The good grandfather. The one I am named after. Jerry’s face is just comforting. I like spending time with him. I like waiting for the terrible wisecrack at the top of the show.

Decapitated body? “Hope his parents weren’t getting him any hats for Christmas.”

Can’t help it. I love ’em. Did you know Jerry Orbach ad-libbed all of those?

It’s a procedural, so there’s a formula. That’s calming. I know it’ll start with a crime scene. They’ll investigate. It’ll go to the DA. In a perfect world, that DA is always Jack McCoy, or as my youngest calls him, The Eyebrows of Justice.

Maybe there’ll be a conviction, maybe not. It almost doesn’t matter. It so reassuring.

When my brain won’t stop, when I feel all jangly, I seek things that will help me be still. In the middle of the night, when options are limited (and now that wine is not one of them) I seek the rhythm and ritual of Lenny and Jack. I want the two-beat, vaguely metallic, “dun-dun” and the reminder that, “In the criminal justice system the people are represented by two separate yet equally important groups. The police who investigate crime and the district attorneys who prosecute the offenders. These are their stories.”

Maybe that’s just it. My brain is wired for story. I can either get caught up in my own, which right now is fraught and stressful, or I can relax into stories I already know, stories that aren’t in my hands. In those moments, Lenny is zenny. He’ll wisecrack, Jack will flinch in outrage. And I’ll breathe.

It’s 5:45 in the morning. Law and Order is on. Anthony Anderson is pretty upset about something.

See how that works?