I open the slider on the porch off our bedroom, hoping to smell the sea. Not today. It’s just humid and still. We could live anywhere, based on the air I’m breathing. You’d never know the ocean is right down the hill.

My dog died recently. I keep looking for him. My first thought most mornings is, “I need to let Diego out.” Then I remember and the hot grief bubbles up. We were eating dinner out on the deck last night. I made clams and pasta. Did you know you can make clams without a bottle of wine? It was surprising to me, too.  The things you learn in recovery.

Anyway, we were sitting and eating and I was keenly aware of Diego not being there. When he was young he was incredibly well behaved. As he aged, less so. He was an unrepentant beggar in his dotage. Last night there was no scolding to go lie down, no laughing at his brazen behavior. Just eating in quiet. His absence is massive. He is so unbelievably not here. Our very Bad Dog misses him, too. I actually think he’s a little depressed. As I write this he’s next to me, his scruffy little chin on my laptop. 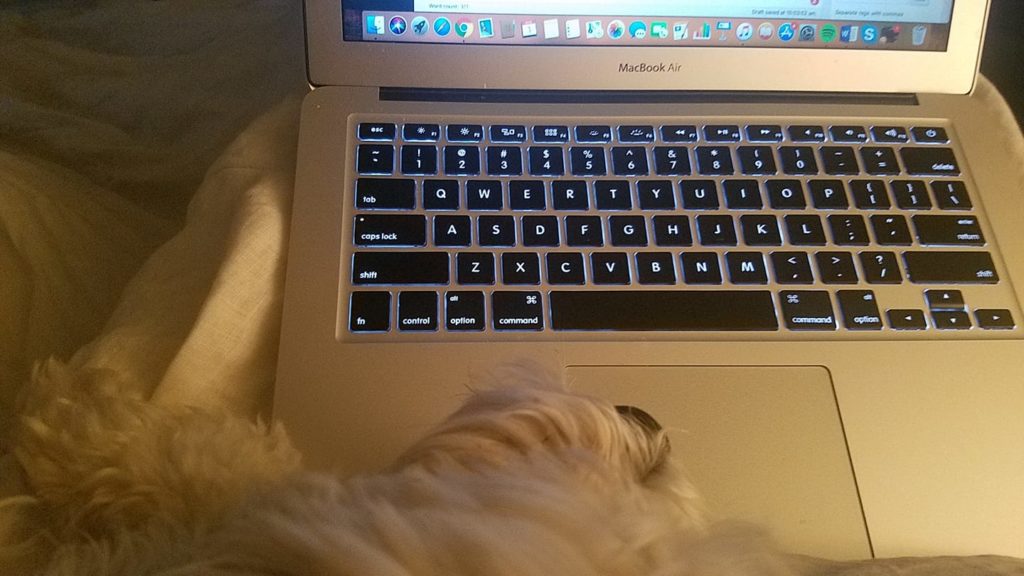 I knew when it was time to let Diego go. It was probably past time, to be honest. I woke in the middle of the night to find that he could no longer stand up at all. He’d lost function in his hind legs entirely. I stayed up the rest of the night with him, both because I could not sleep and because I couldn’t un-know the truth that I would be saying goodbye to him. Favorite drove me to the vet’s office. When we brought him in, I tried to tell the young man at the desk who I was but I burst out crying instead. His eyes filled with tears and he nodded.

He brought us to a special room. He asked me if he could hug me. The young vet who came in was so incredibly kind. She told me to take my time. They had Hoodsie cups in a little freezer in the room. I gave him two, because why not? He finally had chocolate. Bucket list item, checked.

When it came time, Favorite left. It was just me and Diego.

Then it was just me.

Grief is so funny. It’s such a sneaky little asshole.

I thought I was prepared. I know it was the right thing. You would think that would go some way toward mitigating the grief. That it would be less or more manageable or efficient.

It keeps sneaking up on me. It feels like it will kill me. That sounds dramatic, I know. It’s true, though. I know it won’t. That’s true, too. I know it will crash over me, leaving me gasping, and then it will recede and lie in wait for me. It will lessen over time. That’s what they say.

My kid is leaving for school soon. I have been a mother with kids in my house since I was twenty-one years old. I’m forty-seven. For more than half my life I have had at least one of my children under my roof. In two weeks, boxes and bags will be packed, and then quiet. I’ll still have Favorite’s two hooligans, thank God. There will still be noise and clutter and lunacy. But there will also be more empty space.

When I was teaching art I used to tell my students to not neglect the empty space. Actually, I called it negative space. That the mark of a true artist is what you do there. If you’ve never been to the Isabella Stewart Gardner Museum in Boston, you should go. There was an infamous art heist there, decades ago. Priceless treasures were stolen. Gone forever. The museum did something unusual in the aftermath. They didn’t rearrange what was left to fill in the space. They didn’t acquire new masterpieces to round out their collection. They left gilded, empty frames to hold the space of what was lost.

I am in a season of endings. The ground feels like it is shifting under my feet. There is grief and uncertainty and fear.

I’ve learned in recovery I need to name it.

I’ve also learned I need to hold it with an open hand because it will pass unless I insist on hanging on to it.

Nature abhors a vacuum. That’s what they say. And maybe life does, too. Maybe new, beautiful things will start to seep into the cavernous spaces being carved out in my life. But right now, I am going to hold those spaces in my open hand and honor what was lost.