“You must find a way to get in the way and get in good trouble, necessary trouble. … You have a moral obligation, a mission and a mandate, when you leave here, to go out and seek justice for all. You can do it. You must do it.” 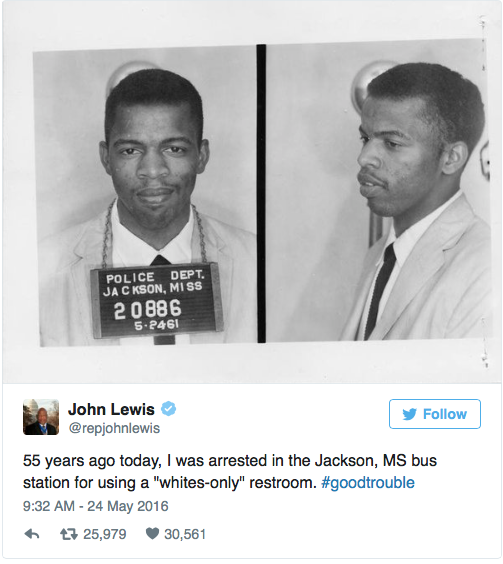 There are a few words that make my skin scrawl.  Moist.  Scamper.  Panties.  Chunk.

Then there are words that just piss me off.  Two in particular come to mind.  Pretty is one. The other is nice.

I dislike them for the same reason, I think.  They both ooze the same synthetic sweetness as sugar substitute- I know it’s SUPPOSED to taste like the real thing, but all I can taste are the chemicals.

Pretty and nice are both paper thin, and they are frequently used to keep women quiet and in their place.  Nice, in particular, seems sinister.  It’s not synonymous with being kind- not really.  It’s a vapid cousin to kindness.  It’s manners and pleasantries.  It’s good behavior versus actual goodness.  I know plenty of deeply unkind people who are perfectly nice.

Girls in particular get indoctrinated in niceness.  Nice girls are mostly defined by what they DON’T do, right?  They don’t make a fuss.  They sacrifice their passions and ambitions at the altar of everyone else’s comfort.  They’re mostly quiet. Compliant.  They follow the rules, most of which they had no agency in creating.  No boat rocking.  No disturbing the status quo.  Little origami girls, folded small and pretty.  Ornaments of the establishment, not instruments of change.

Nice girls do not cause trouble.

How many women have endured unwanted advances because it was so ingrained in them to be nice?  How many times do we, as women, put up with someone harassing us or crossing boundaries because we don’t want to hurt their feelings or make a scene?  We’re so conditioned to be well-behaved and not let our pesky needs interfere with anyone else’s wants.  How many of us have responded to a, “SMILE, PRETTY LADY!” hollered at us by a stranger in the street, because we’ve learned the hard way that to not comply is to risk the inevitable, “BITCH!” that comes our way when we don’t serve up the NICE that they feel they’ve purchased with the PRETTY?

I’ve been trying to write ever since the election.  I start.  I stop.  I feel stuck.  I don’t know how to articulate what I want the way I want.

I am angry.  Deeply angry.  And scared.  I suspect many of the people who voted for the president-elect felt that way heading into the polls.  I can empathize with that.  I am not scared of the same things, but I know what fear feels like.  I am trying very hard to keep that in mind.

And I am.  I am another angry woman.

So the needle’s unmoved.

Every time I turn on the tv or scroll through social media I see reports of public displays of how people feel about the election’s outcome.  People gathered in protest, marching, memes, donations to progressive causes are through the roof. (fun fact- I donated to the Trevor Project in Mike Pence’s name, and to The Compassion Collective in honor of the president-elect.)  Sometimes blocking highways, sometimes being destructive. 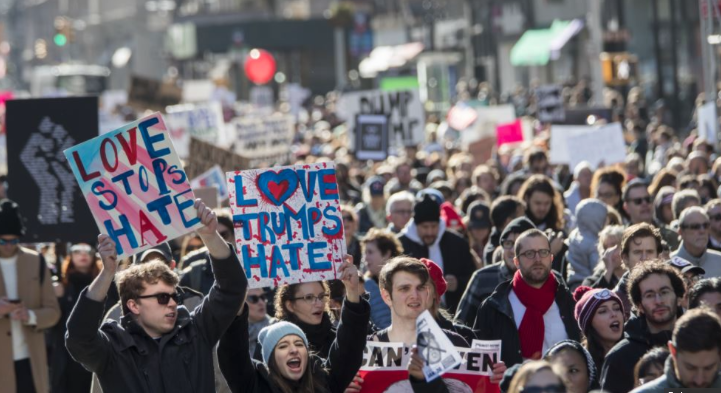 I’ve also heard racist rhetoric, seen swastikas, invective hurled at women wearing hijabs, gay men beaten up coming out of clubs, the Klan has been emboldened now that the candidate it endorsed has won. Those are not acts of protest, though, let’s be clear about that.  We need to name them- call them what they are.  Those are hate crimes and acts of domestic terrorism. 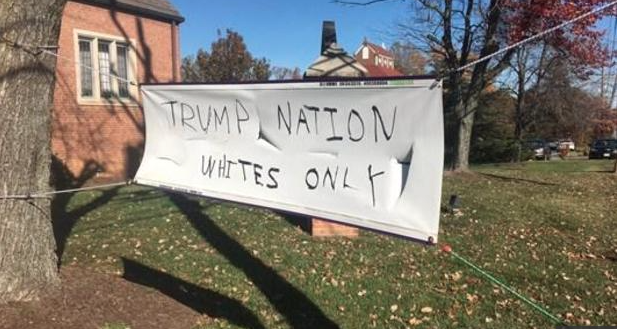 Protest is always upsetting.  It’s supposed to be.  That is, in fact, the whole point.  It’s disruptive, too.  Rosa Parks’ refusal to give up her seat was really upsetting to people. People of color insisting on sitting at the lunch counters in the 60’s was deeply upsetting to the status quo.  Susan B Anthony’s insistence on voting, and then refusing to pay the judgment against her for doing so upset the hell out of people.  The March on Washington upset people.  The Montgomery bus boycott of 1955 was incredibly disruptive.  Emma Sulkowicz dragged the mattress on which she was raped around the Columbia University campus to call attention to the school’s mishandling of her assault.  I’m betting that was a little disruptive.  The people at Standing Rock are upsetting authorities- which is likely why you know what is going on at Standing Rock.

Part of why those protests were so effective is the marked difference between the conduct of the oppressed and the oppressors.  We remember Tiananmen Square because in the face of unspeakable force- a tank- a civilian stood quietly, with valor.  We remember the marches of the Civil Rights era because the people were peaceful even as the police unleashed dogs and fire hoses on them.  We all get to choose who we are and how we move through the world.  We get to choose how we give voice to our frustration, our fear, our despair. 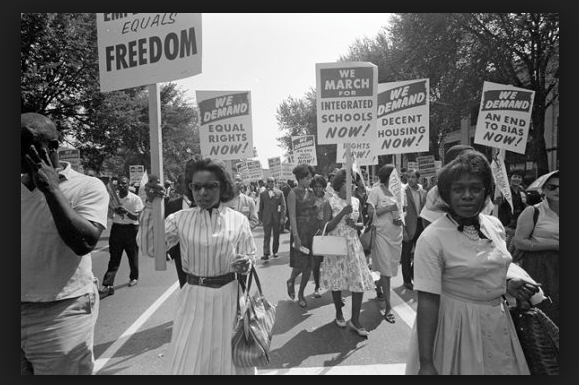 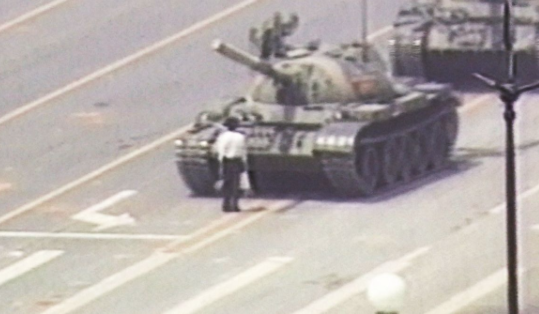 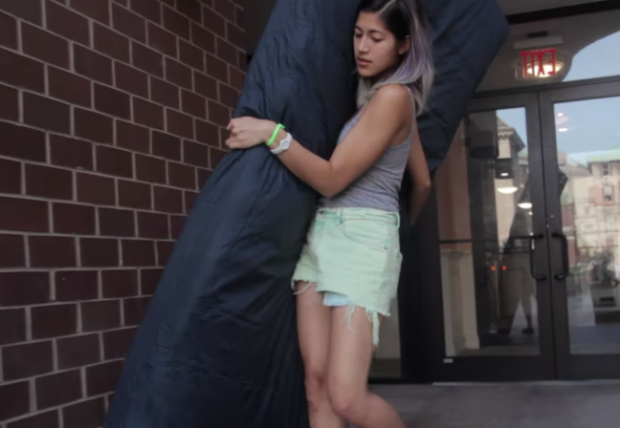 Protest is upsetting and disruptive.  By design.  Disruptive and destructive are not the same thing.  We can’t afford to only fight hard, we need to fight smart.  We can’t afford to allow our message to be undercut by mayhem.  That kind of scorched earth protest might feel good in the moment, but it undermines whatever cause is being espoused.

In the past week I have written and deleted so many tweets and posts, and I’ve put up a few that I immediately took down.  I’ve enacted a 4 step process any content I decide to put out into the world must go through.

What is my intention?

How does it help?

I find that I have no patience for protest that renders itself ineffective because it’s mean, or violent, or makes itself easy to dismiss.  These are serious times that call for serious people and serious protest.  No one’s mind or heart was ever changed by being called names- but we must name evil when we see it.  The stakes are as high as they have ever been.  People of color, women, LGBTQ+, Muslim and Jewish people, immigrants-these communities are terrified, and they should be.  We should be.

Martin Luther King Jr famously said “Riot is the language of the unheard.”  I believe that’s true.  I understand the urge to break, destroy, and burn- I really do.  But it’s the language of the unheard for two reasons.  It is born of going unheard, and it renders your message unheard.  It makes you easy to dismiss- and there’s no time for that.  There’s no time for protest that can be written off that way.

A while back someone I love asked me to read a letter she’d written.  It was incredibly powerful.  Page upon page full of anger and pain.  It was profanity laced and accusatory- but it was drenched in truth.  It was a reckoning, and it knocked me back on my heels.

I read it a few times, because she asked me for feedback.  I asked her this:

“Do you want to scream, or do you want to be heard?  Because those are two different letters.  This is an incredibly powerful piece of writing that the intended recipients absolutely will not hear.”

The final letter she sent was a few paragraphs long.  Maybe even more powerful, and much harder to ignore.

Self indulgent expressions of outrage are a luxury we don’t have- not if we want to stem the tide of bigotry and violence, the impending legislation that would be harmful to so many, and the wresting of our national narrative by voices of hate.

We get called nasty when we use our voices and don’t back down.  When we don’t follow the script that women are supposed to in the face of misogyny.  We don’t have to break windows or block highways or be hateful to get that label, we need only not yield, not acquiesce, not appease.  The only requirement, it seems, for being nasty is to simply not be nice.

By all means, find a place to scream.  Find an outlet for that panic and rage- but not in your protest.  It’s too important.

The day after inauguration there will be a women’s march on Washington DC.  I will be there.  If it creates a safe space for even one person, I will wear a safety pin.  If Muslims are ordered to register, I will register alongside them.  I will continue to call elected officials and hold them accountable.  I will keep using my voice and my platform.  I will use the gifts I have in whatever way I can.  I will not make myself easy to dismiss.

I am only one woman, with one voice- but I intend to use it.

I’m inclined to make some trouble.  It definitely won’t be nice, but my hope is that it will be good. 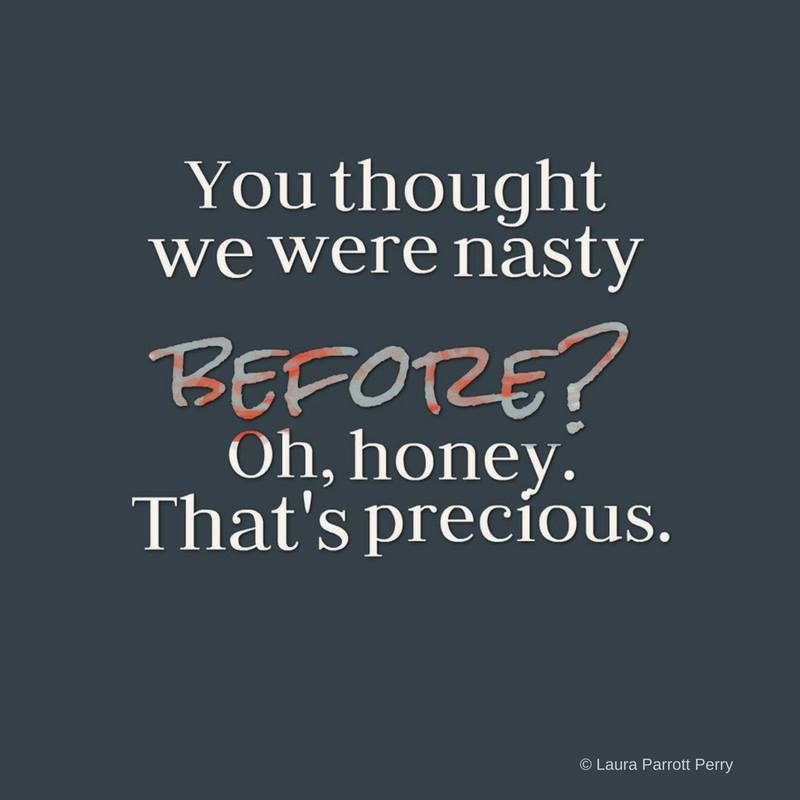