“I need to learn to tell my story properly because we learn from the part of the story we focus on.” 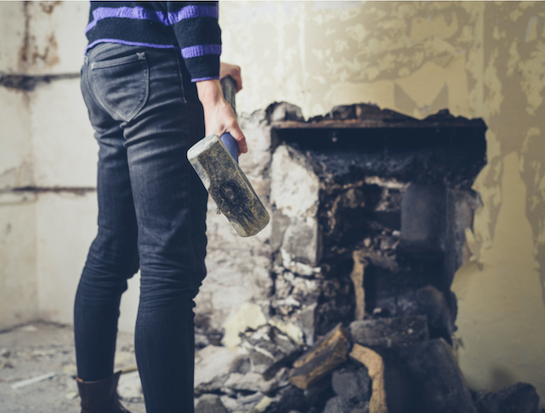 I was having a conversation with a friend recently about her divorce. It got me thinking about when my own marriage imploded. The impact was enormous. The facts were hideous and hurtful. What I told myself about those facts was worse. By a lot.

As a woman with a history of trauma at the hands of men who were supposed to love her, those facts were never going to be just facts. I looked at what was happening through the lens of ancient pain and grief and loss. I carried that trauma in my very bones. The new wound only served to aggravate some very old injuries.

I did two things that had been my pattern since childhood. Sometimes it takes a while to spin a story out of what is happening in our lives, but not for me. Not that time. I immediately told myself a story and it was a story of shame. Next, I resolved to tell no one.

Sometimes I think about that scene in Field of Dreams when James Earl Jones’ character says something about memories being so thick you have to swat them away like flies. That’s what those early days were like, moving through my shame stories, new and old, having them brush up against my face, obscure my vision, make everything blurry.

Actually, that was probably the pinot.

I couldn’t see anything other than the pain I was in. I couldn’t see that anyone else was in pain. I couldn’t see that some of the things that were happening weren’t mine. They weren’t happening to me, they were just happening – but because I was determined to be alone in my pain and because shame is such a good prison guard, I only had my own counsel to go by – and I used to believe everything I told myself. Bless my heart. My refusal to tell the story I was staring at was killing me and hurting everyone who loved me.

The stories we don’t tell anyone, anywhere, in any way are in charge of our whole damned lives. If you’re not telling it, dollars to donuts you’re dwelling on it.

The word dwell means to live, so what if when we say we’re dwelling on the painful, harmful stories it really means that we’re living IN them? What if we’re setting up house in our pain? Even when whatever it is isn’t happening anymore, maybe we’re choosing to live out of that chapter of our life story.

When our stories are based in shame we keep them locked up like prisoners and they return the favor – and what do you never do with prisoners? You never take your eyes off them. It’s too dangerous, right? Isn’t that what prison guards in movies always say? “Don’t turn your back on them.” “Have eyes in the back of your head.”

When we do that, it means our trauma becomes the focus of our life – and that makes sense, because it feels so freaking dangerous to have it any other way. The thing about that kind of relentless focus is this: what we stare at becomes magnified. At the very least, our shame stories become a sort of filter – like on Instagram. Looking at things through that shame filter may not obliterate them, but it’ll alter your perception. It can make innocuous situations seem dangerous but it can also make harmful things seem fine. Good, even. Seen through the trauma filter, a relationship that is abusive or controlling can seem normal. When violence or neglect or degradation are your baseline then anything short of that can seem acceptable.

Our stories are powerful forces, for healing or for harm. If the story you are living out of is causing you to double down on your pain or check out of your life, then maybe that dwelling needs a remodel. The stories of our lives are not unlike the walls of a house. Sometimes you’ve got to strip those away. Sometimes it’s a gut job.

What are the objective facts? What is immutable? Those things, the things that inescapably happened to you? There is nothing to be done about them. We all get dealt the hand we get dealt, and anyone promising to heal you of the facts of what happened is likely selling you something.

All of the story, hand to God – ALL of it – is optional. It can be re-written or re-interpreted at any point along the way. And if you re-write your story of harm, if you come to understand it differently, then it can be redeemed.

All of my intense shame stories are the ones that I built around the harmful facts of my life. Those facts are now at the center of my most fulfilling work. The stories I told myself about what happened to me, about who I was, kept me lonely and terrified. The new stories I’ve built around those same facts are my greatest source of connection and purpose. I found my calling when I began to tell the truth about my life and to understand those stories differently, and a calling is nearly always redemptive in nature.

Once your story has been redeemed your focus shifts to that – and then that redemption is magnified.

You hear a lot about the necessity for kids to be given a good foundation in life, but we don’t all get the circumstances that lend themselves to a beautiful story off the bat. It’s great when kids are born into a healthy family, with enough to eat, clean clothes, encouragement, faith, and parents who are crazy about each other and who protect their children. I mean, it seems great on the tv. That’s not the situation for a lot of us. So many of us are born into intergenerational trauma, addiction, dysfunction, and abuse. Not the sturdiest underpinnings on which to build a life. Here’s the thing, though, those painful facts aren’t the whole foundation.

So many of us let certain facts of our lives author the whole story, but as Joanna Gaines would say when surveying an absolute disaster of a house: a lot of that shit is cosmetic. Actually, Joanna Gaines would NOT say that. It’s what the Google translator in my head says when Joanna talks.

The stories we tell and are told about what happened to us aren’t even the framework. They’re walls. That’s it. They are walls that we build up to live in, maybe to keep us safe, maybe to hold us . Maybe both. You blow out a wall here and there? You open things up and let the sunlight in? You strip it down to the studs? You can build something new.

At the end of those home makeover shows there’s always that moment of disbelief. I cannot believe they made something this lovely out of that ruin. How is this the same place?

This poem, Good Bones, is one of my favorites:

Look around at your life with a discerning eye. What’s foundational? What’s structural? What’s good? That’s the only stuff you need to keep. Everything else can be reworked or tossed out. Be mindful of the things on which you choose to focus. Build yourself a better story to live in – you can make it exactly what you want. Even the painful parts. Grab a sledgehammer. Knock some shit down. Learn to tell your story properly. Let’s make this place beautiful.

Previous Post: « Join me in the free Clarity Course with Caroline Garnet McGraw and get this sample chapter of my book!
Next Post: Fight Club »