When I was younger, so much younger than today
I never needed anybody’s help in any way
But now these days are gone
I’m not so self-assured
Now I find I’ve changed my mind
and opened up the doors

Lennon-McCartney
I love being a helper.  I love being the one to swoop in and do the thing that needs doing. There’s an outside chance I harbor latent superhero delusions.  I HATE asking for help.  It is my least favorite thing.  I have had to revisit my stubbornness in this area over the past few years.  That’s probably a really good thing, but it doesn’t change the way I feel about it.  Then Brené had to go and ruin EVERYTHING with her wisdom:

Here’s the bottom line. Ready?  When you cannot accept and ask for help without self-judgment, then when you offer other people help, you are always doing so with judgment… Because you have attached judgment to asking for help.

She’s the WORST.  The only thing less appealing to me than asking for help is the thought of myself as a judgmental person.  Gah.

Many of us are willing to extend a helping hand, but we’re very reluctant to reach out for help when we need it ourselves. It’s as if we’ve divided the world into “those who offer help” and “those who need help.” The truth is that we are both.

See?  She makes me crazy.

I was at Storyline Conference in Chicago about a week ago.  I knew it would be amazing. There are always phenomenal speakers who are living extraordinary stories that inspire and motivate.  Donal Miller, Jeremy Cowart, the always wise Shauna Niequist, and the force of human nature, the joy personified, the delightfully improbable critter that is Bob Goff.  So much goodness.

Coming away from it, though, Mary and I found ourselves thinking and talking the most about two men, Justin Skeesuck and Patrick Gray, who shared their story. 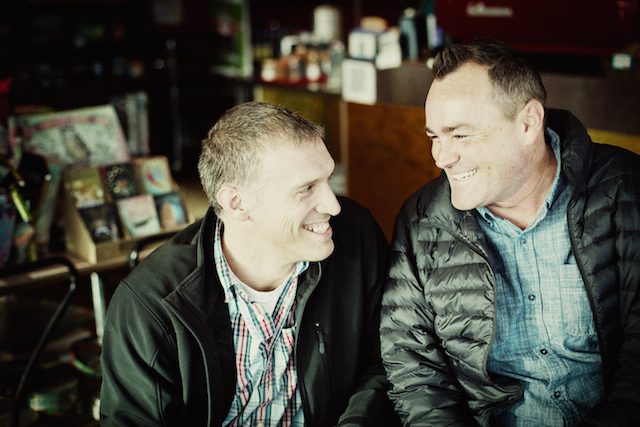 Justin and Patrick are lifelong friends, born in the same hospital 24 hours apart.  They grew up in a small town.  At the age of sixteen, Justin was in an awful car accident.  The trauma of the accident triggered a progressive autoimmune disease that until that time had lay dormant in his body.

Help me if you can, I’m feeling down
And I do appreciate you being ’round
Help me get my feet back on the ground
Won’t you please, please help me?

Now, decades later, Justin has lost the use of his arms and legs, is reliant on a motorized wheelchair, and needs assistance with the most basic activities of daily living.  It is so hard when things you take for granted, things you once did without even having to think about them, become more than you can handle on your own.

He and Patrick both have beautiful families.  Patrick is a nurse.

Sidenote:  God bless the nurses.  Go directly to heaven- do not pass Go, do not collect $200.  Actually, do collect $200.  Nurses’re vastly underpaid.

Justin combines his first hand knowledge of living with physical challenges and his love of travel to help inspire others with disabilities to explore the world and have adventures.  Just writing that made me think of a young man I knew in college.  I was a rehabilitation counseling major and was working in the center for students with disabilities.  He used to hate when people said he was “confined to a wheelchair.”  He liked to point out that if he didn’t have a wheelchair he would be confined.  His wheelchair was, as he put it, “his ticket to ride.”

ANYWAY.  Justin took the challenges life had thrown his way, and then used the perspective they gave him to help other people.  How’s that for giving your pain a purpose?  You know I love that.

One Saturday, a few years back, Justin was watching Rick Steeves (bless) do an episode in Spain, and he was talking about Camino de Santiago- a 500 mile trail across Spain that is a sacred route used by pilgrims for centuries.  Something inside him felt the pull- he felt called to the Camino.

A few weeks later, he was showing Patrick the video. 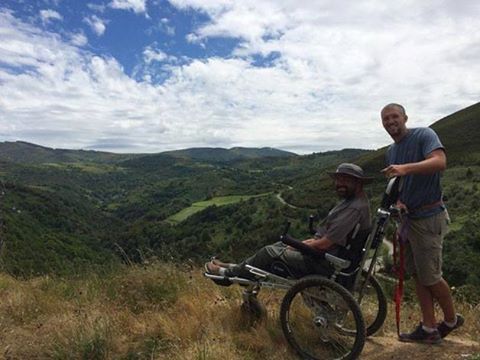 500 miles.  And did I mention the Pyrenees Mountains?

I am tired just thinking about it.  Anyway, their story is amazing and they tell it so much better than I could hope to- don’t you want to know what happened?  WELL.  They’ve made a documentary of their adventure and are trying to raise enough money to get it finished and distributed.  I cannot wait to take our kids to this- it’s an opportunity for them- boys especially- to see a deep, meaningful bond between men.

Mary and I  approached them after their talk.  They were so lovely.  I told them how much I appreciated seeing such a beautiful male friendship, and that so many times we reduce male relationships to cartoonish activities- watching sports and admiring cars- basically parallel play for adult boys.  Patrick’s and Justin’s friendship more closely mirrored the ones I have with my best girlfriends.  Emotional.  Sacred.

Mary and I talked last night about why we were so deeply affected by their story.  It’s because while we would both be the first to raise our hand to be the pusher, we would resist mightily the role of pushee.  I don’t know if I could do it.  Needing someone’s help is frightening for me.  I seldom accept it graciously.  I don’t really like that about myself.

Our society teaches us, men in particular, that vulnerability is bad.  Weak.

Boy, do we have that backwards.  Vulnerability is courageous, and self assured.  If you aren’t secure in yourself, asking for help is next to impossible.

Patrick is a strong, kind, loving man.  He just radiates goodness, that one.  And Justin?  Well, that kind of bravery just knocks me out.

Help me if you can, I’m feeling down
And I do appreciate you being ’round
Help me get my feet back on the ground
Won’t you please,
please help me?

If you would like to be a part of making sure this film gets seen far and wide, feel free to  be good enough HELP.  Justin and Patrick will be brave enough to ACCEPT it.

“When you deny someone the opportunity to help you, you deny them the joy in life.”