It takes a lot of time and money to look this cheap, honey.

Yes, I know Halloween is over- but it’s had me thinking a lot about playing dress up.  I went to a friend’s birthday party Friday night, and it was Halloween themed.  My daughter told me I should dress up as something horrifying, so I did. 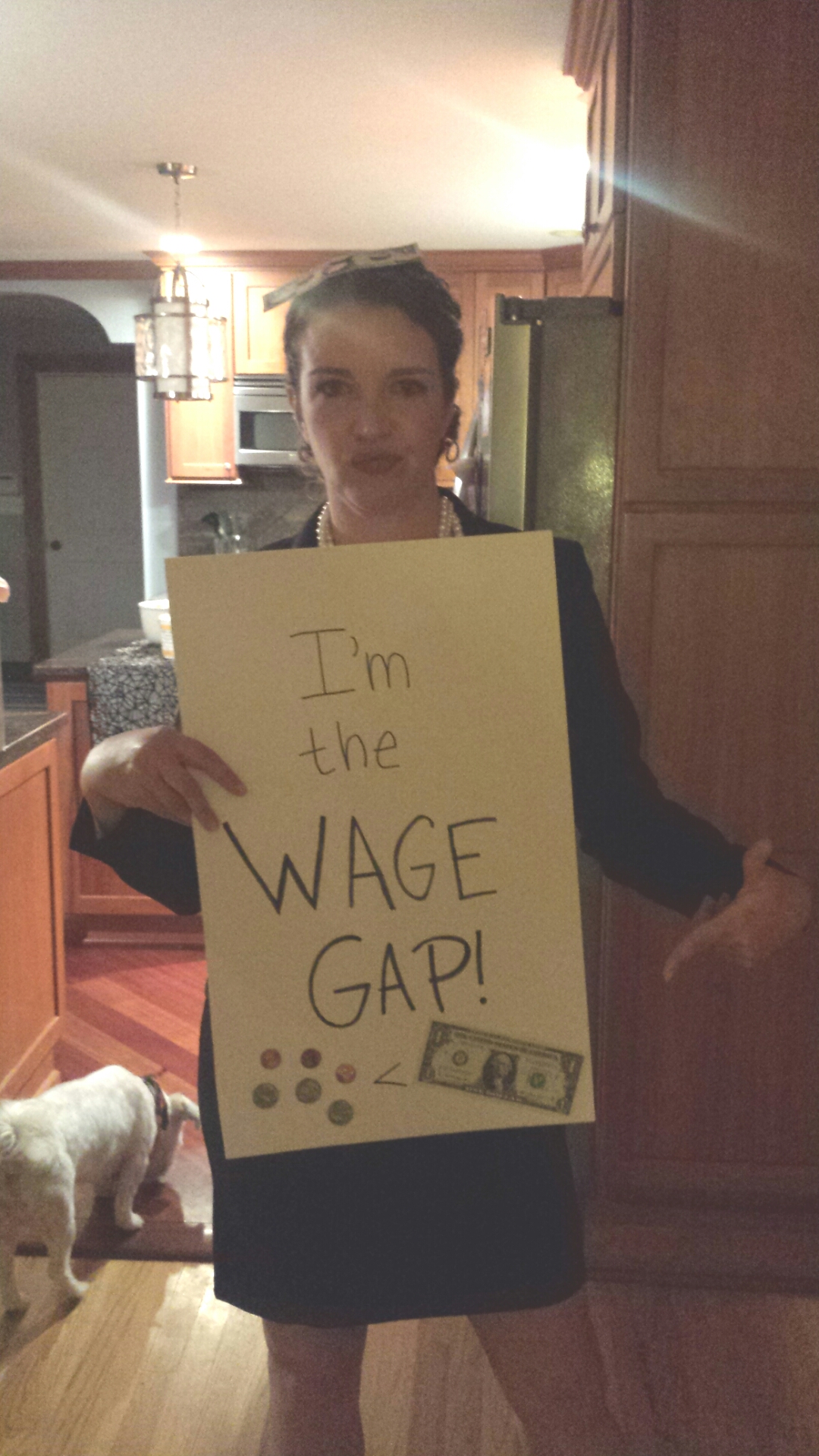 A while back, Mary and I needed to head into Boston for a meeting.  It felt like a big deal.  It turned out to BE a big deal.  I was anxious.  I told her I needed a costume.  A grown-up costume, since I would be masquerading as such.

She laughed, and it became one of our ‘things.’  Whenever we have an event, Mary will say to me, “Let’s talk costumes.”

Like most inside jokes, it’s about something bigger.  It is for me, anyway.

I have always spent an inordinate amount of time worrying about my appearance.  Well, I don’t know about ALWAYS, actually.  For as long as I can remember.  I don’t remember who I was before my abuse.  I have heard stories, had versions of that younger self sketched out for me by outside observers.  I don’t remember her, though.

I DO remember the first time I stressed out about something I was wearing.  It was at my first communion.  I was wearing my little white dress with ruffles down the sleeves.  I had on my veil, which seemed to me the HEIGHT of glamour.  I remember feeling pretty, but nervous.  I was scared to walk down the aisle of Sacred Heart church with everyone looking at me.  My dad was there, things were awkward.  I was nervous I would mess up at the altar.  Say the wrong thing, use the wrong hand.

We were brought into the church in two lines.  Girls in one, boys in the other.  The girls filed into a row on the left-hand side of the church.  Lots of stifled giggling, and anxious, excited fidgeting on the hard pew bench.  Lots of little boys tugging at ties, and little girls fiddling with ribbon trim and tights.

There was one girl in my CCD class who…how to put this?  She was less than kind.  She made fun of me all the time.  She was very PIOUS, though.  Do you remember the book, The Best Christmas Pageant Ever?  She was Alice Wendleken.  She was all vaseline on her eyelids to make her look angelic, but had a mean streak a mile wide.  She liked to make pronouncements as though she had God’s ear, and Jesus on speed dial.  When she found out my parents were divorced it was Christmas in July for her.

I became her pet project.

She was sitting four or five girls down from me.  I was nervously swinging my feet, and it snagged her gaze like a nail on a sweater.  “LAURA!” she stage-whispered at me.  I froze because I knew it was not going to be good.  “YOU’RE WEARING BLACK SHOES.  YOU’RE SUPPOSED TO BE WEARING ALL WHITE.”

Now.  The adult me wonders what was going on in that child’s life that she felt compelled to turn a spiritual milestone into a bloodsport.  The little girl me, though- the one who was already wrestling with shame and self-loathing, the one who already felt OTHER and NOT GOOD ENOUGH, the one who already half believed that she was unredeemable- she soaked in that poison, and it created an impermeable shield for the rest of the day.  None of the kind and loving things anyone else said to me that day could pierce it.

Things were really tight financially.  I am certain if my mother could have afforded to buy me white shoes for the occasion, she probably would have- but white shoes for a little girl who would have much rather been outside climbing trees and catching frogs were not a wise investment.  To be fair, she also probably didn’t know about the whole “going to hell” thing.  It’s one of the lesser known passages in the Bible- Buster Brown 1:12…

Cut to high school.  We never had much money for new clothes.  We were three girls with a single mom.  We grew up with a fair amount of scarcity- not perceived scarcity- ACTUAL scarcity.  Frequently no heat or electricity during New England winters level scarcity.  My mom worked hard and did her best, we just didn’t have a lot.  Not a tragedy.  I actually learned some great things growing up that way.  There are gifts in growing up poor, alongside the obvious challenges.

My ninth grade year, my mom got me clothes for Christmas. There were neon checkered pants, a neon shirt.  Suspenders, naturally.  A hair bow.  Matching socks.  This was in the 80’s.  Subtlety was not really our jam, per se.

And I did.  And I felt GREAT, which was new.

The thing about not having a big wardrobe is that you cycle through your outfit rotation pretty quickly.  The thing about blinding neon clothing, is that it rapidly draws attention to how often you are wearing the same thing.

Again, I caught someone’s gaze.  There was a girl in my grade who was really quirky- very much an individual in the way that she dressed, the music that she liked.  Which makes it all the more interesting that she chose to humiliate me.  I walked into class one day, wearing my outfit.  She sized me up, and smirked.  Then she said, loudly, “Laura, why don’t you wear that outfit a little more often.”

And then I died a thousand deaths.  I spent the entire period trying not to cry, which would have only fueled her delight.  Every time I wore it afterward, she would tell me in a sing-song sweet voice that she liked my outfit.  I eventually stopped wearing it altogether.

I became very concerned with being dressed appropriately- especially for EVENTS.  It was all about not making a mistake or drawing too much attention.  I wore a lot of neutrals, my theory being that you could wear the same outfit twice a week if it was bland. I had a horror of being over- or under-dressed.  Of doing anything with my appearance that would single me out for ridicule.

It bled into my choice for my wedding day.  I chose the plainest, most nondescript gown I could find.  I really did like it, but it was more about not calling too much attention to myself or making a mistake.  It just occurred to me now that my immediate rejection of the notion of a veil might be related to my communion experience.  Once again, I was worried about walking down the aisle in a white dress and attracting the gaze of someone who might not approve.  Anyway, it would take me a decade and a half to fall properly in love with that dress.  It would take bedazzling it and giving it away.

I don’t know how those two mean girl interactions would have affected me had my brain and heart not already been such fertile planting ground for the seeds of shame.

My adult, somewhat healed brain and heart know that those two girls were likely acting out from a place of pain.  Happy, healthy people do not try and make themselves big by diminishing others.My grown up perspective tells me that who I am and how I look are not the same thing.  Sort of.

I still get intense anxiety before events- worrying that I’ll look okay, that I’ll be dressed the right way.  I hear moms on Facebook joke about yoga pants being their go-to uniform, and having their hair a mess.  Sometimes I’ll chime in, but the truth is I seldom if ever dress down.  I have way more clothes than I need, and I still focus way too much on what I look like.  It’s superficial, but it runs deep.  Funny, that.

Hopefully, these days my outsides match my insides a little more, though.  Hopefully my desire to look good is more a reflection of truly feeling good, rather than an actual costume.