“Justice will not be served

until those who are unaffected

are as outraged as those who are.”

Last weekend, social media was awash in the hashtag #ThisIsNotUs.  I heard politician after politician say, “America is better than this,” and, “This is not who we are.”

That needs to stop.  Seriously.

Listen, I get it.  I get the urge, when confronted with such ugliness, such hatred, ignorance, and violence, to disavow the behavior as something aberrant, alien.  OTHER. Who wants to be associated with what is the very worst of human nature?  I have a visceral reaction to what I saw take place in Charlottesville.  It sickens me.

The thing is though, what we saw happen in Charlottesville is us.  It is.  It is exactly us, at this moment in time.  Those photos of faces twisted in fury, lit by torches?  Those are family photos.  They are the same faces that were once covered by hoods, and before that worn by overseers and slave traders.  They were present at the bus riots in Boston, the lunch counters in Alabama, and this president’s rallies during the election.  Those faces have always been a part of the American family.  They have never not been us.

The United States of America was the first country born of an idea.

“We hold these truths to be self-evident, that all men are created equal, that they are endowed by their Creator with certain unalienable Rights, that among these are

Life, Liberty and the pursuit of Happiness.”

That idea, that IDEAL, has never been realized in this country.  It was lofty and bold and beautiful and penned by a man who owned other human beings.  Even the guy who WROTE it didn’t believe in it enough to fully live it.  That is a wildly uncomfortable FACT.

In Dr. Martin Luther King’s most famous speech he said:

“I have a dream that one day this nation will rise up and live out the true meaning of its creed: “We hold these truths to be self-evident: that all men are created equal…

I have a dream that my four little children will one day live in a nation where they will not be judged by the color of their skin but by the content of their character.

I have a dream today.”

That remains an unfulfilled dream.

I have heard in years past that race as an issue is a generational thing- that kids today are ‘post-racial.’

I think we saw a black man elected to the highest office in the land and it allowed us to think we’d done work we have not done.

Take a look at those photos of the people surrounding that statue in the square in Charlottesville, the torches they carry illuminate their YOUNG faces contorted in rage as they shout, “Blood and Soil,” a phrase derived from the German, “Blut und Boden,” popularized during the Nazi’s ascension to power.

The comparison to Nazis is not just apt, it’s direct.  It’s a same/same comparison. These are not remnants from a generation past, these are young people, primarily male, who have LEARNED from generations past.  These young men didn’t descend on the square and commit their first act of hatred.  There is exactly zero percent chance that’s the case. They came from their families and communities and schools and jobs where they learned, spread, and lived out of this hate.

I’ve heard people say President Obama brought this out in people, which is patently ridiculous.  I have news for you, if your reaction to policies you don’t agree with is to hate black people, you already hated black people.

And it’s nonsense to blame this entirely on the current President.  If those seeds, if that underlying racism wasn’t already there, there is nothing that man could have said to foment such ugliness so quickly.  Did he embolden them?  ABSOLUTELY.  His rhetoric and blatant inciting of violence at his rallies and his hiring of Jeff Sessions and Steve Bannon resulted in turning hooded racists into bare-faced racists.  He pulled the covers off it, he wrote them a permission slip- but these people were already here, in line at the bank, next to us in class and in church pews and across the Thanksgiving table.

They didn’t march on Charlottesville because the removal of the statue of Robert E. Lee was an attempt to “bury history,”  either.  Hear me when I say this:

Exactly no one is suggesting we bury history. What is being asked is that we no longer display signs and symbols and statues glorifying the horror of slavery. Would a statue of Hitler be okay in Munich? Ok to fly Nazi flags in the towns where Jewish Germans were packed onto train cars and sent to their deaths? We should have comprehensive museums that accurately reflect the monstrous national sin that was slavery- not statues of its architects and defenders that were placed in town squares to terrorize and intimidate.

And I am guessing these young men knew that.

These young men were intent on preserving a statue which was a state sanctioned act of terror because they are terrorists.  Full stop.

There was a book I read many years back called Hitler’s Willing Executioners.  It wasn’t about Nazis, it was about regular Germans.

Ordinary people, who said nothing and did nothing to halt the tide of insane nationalism combined with systemic anti-Semitism that resulted in the Holocaust.  People who held latent bias, perhaps, and just didn’t want to get involved in all that ugliness.  Who didn’t want to rock the boat or make trouble.  Maybe they didn’t want the Jews exterminated but they didn’t want to stick their necks out for them either.  So they stayed quiet.  They went along.  They behaved.

And so, some frustrated, angry, self-important, power hungry little man came along who gave them someone to blame for every unrealized dream, every personal failure, every national problem.  Any of this ringing a bell?

These terrorists in Charlottesville are not other.  They’re not.  When we say, “This is not US,” we are saying what we want to be true rather than what is. The fact that that’s unsettling and unpleasant does not make it untrue. Those angry men might not be ME, and they might not be YOU- but they ARE us.  US is a collective noun.  It means me, and it means you, AND IT MEANS THEM.  They didn’t come from nowhere.  They didn’t come up with those ideas on their own.

If the terrorist that drove the car that killed that killed Heather Heyer and injured dozens more had more melanin in his skin, if his family worshipped at a mosque and not a church, we’d be hearing a hell of a lot more, “Where was he radicalized?”  You can bet your bottom dollar this White House would have used the word terrorist inside of an hour.

White America needs to get real.  We need a long, hard, unflinching look in the national mirror.

One of the most life changing things I have learned in recovery is to examine my part in things, whether it be conflict, relationships, resentments- anything that’s making me uneasy, unhappy, or unhealthy.

This is not a delightful process.

Before I got sober I was much more inclined to feel like life and hardship and harm were just happening to me, that I was a victim of circumstance.  The trouble with that is this: If you are not part of the problem, if you have no ownership of any of it, it’s nigh impossible to be part of the solution because you have no agency in how you got there.

If these radicalized white nationalists are just happening to us, we’re screwed.  If they’re just spontaneously erupting like a whack-a-mole from hell, well then, there’s not a hell of a lot we can do about it.

Spoiler alert- they’re not.  Every racist joke unchallenged at the dinner table, every stereotype reinforced by the media and news outlets not called out, and every polite biting of the tongue when someone crosses a line of decency is a seed sown.  When your kid saw you not raise hell when an elected official called the First Lady of the United States an “ape in heels,” when a Mayor sends out a meme with the White House front lawn depicted as a watermelon patch, when President Obama was lynched in effigy on a regular basis, and you said NOTHING?  You became complicit.

And when you deny your own privilege, when you, “yeah, but…” when you reflexively get defensive rather than simply listening and acknowledging someone else’s pain and the harm that has been done to them by our country, you are actively part of the problem.

These white nationalists are not apart from us, they are a PART OF US.  Denying that is just doubling down on our guilt.

There’s a part of Dr. King’s speech that doesn’t get quoted as often.

“In a sense, we have come to our nation’s capital to cash a check. When the architects of our republic wrote the magnificent words of the Constitution and the Declaration of Independence, they were signing a promissory note to which every American was to fall heir. This note was a promise that all men, yes, black men as well as white men, would be guaranteed the unalienable rights of life, liberty, and the pursuit of happiness.

It is obvious today that America has defaulted on this promissory note insofar as her citizens of color are concerned.”

We remain a racist nation.  We do.  And it is not enough to wring our hands and lament when violence erupts.  It’s not productive to go on defense when people are honest about it.  It is not enough to engage in pointing fingers at others to blame when we’ve not searched our own souls and done our own work. 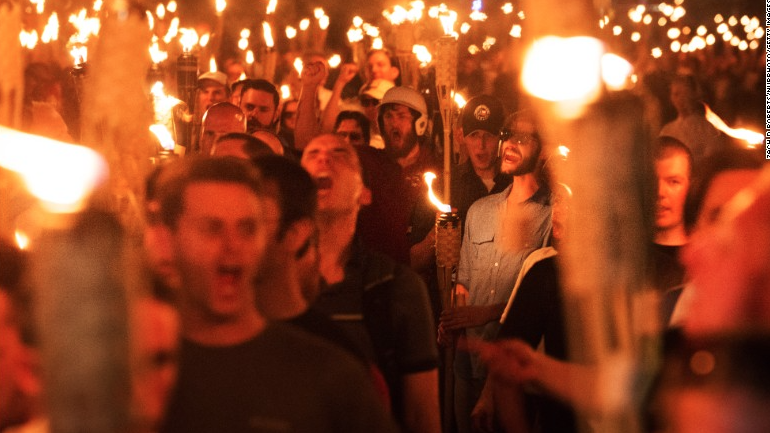 We need to listen.  We need to learn (which does not mean making it someone else’s job to educate us.) We need to repent.

Until we do those things, this is the U.S., and this is us.