“I wondered if that was how forgiveness budded;

not with the fanfare of epiphany,

but with pain gathering its things,

and slipping away unannounced in the middle of the night.” 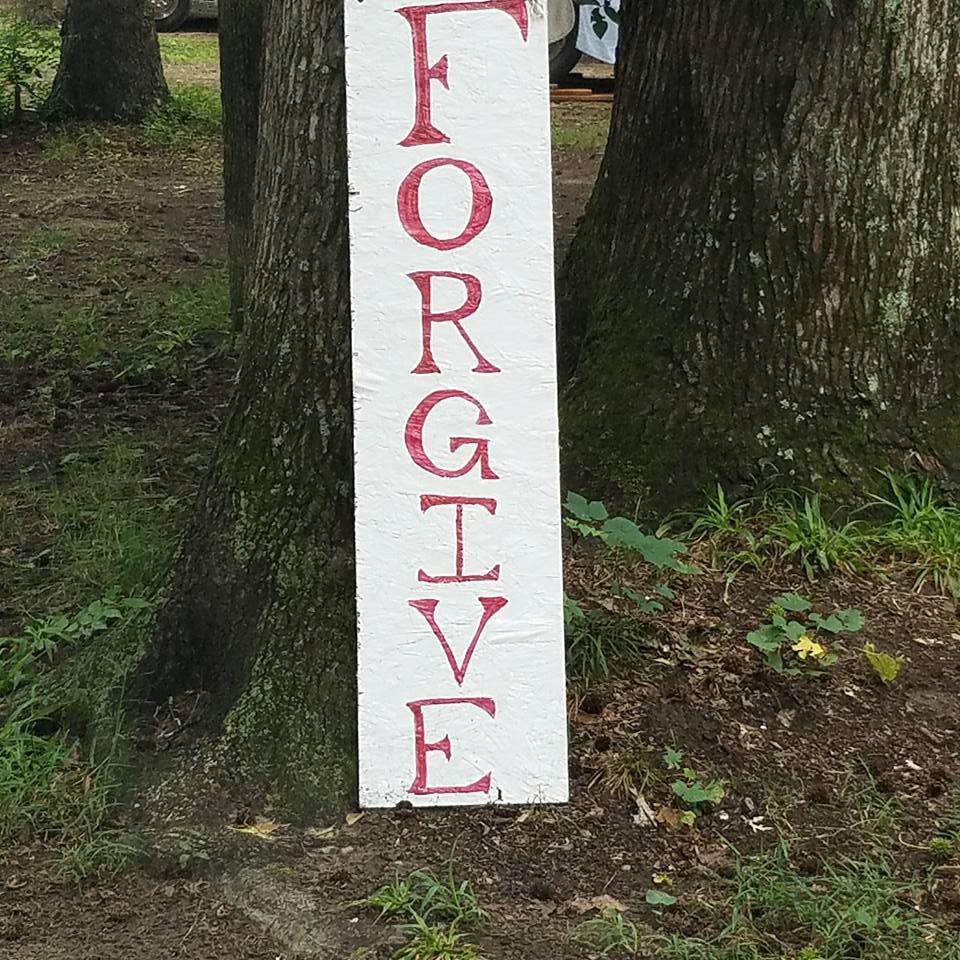 Recently, I’ve found myself part of many conversations around the topic of forgiveness. Forgiveness is something I think many people fundamentally misunderstand- I know I did for a very, very long time.

I spoke at Wild Goose last week and got a question from a survivor wondering if she owed her abuser forgiveness.  I had another question about the timeline for forgiveness. Another about whether it’s truly ever possible.  Another from a woman who copped to not wanting to forgive.  Just flat out not wanting to.

Oh, do I so totally get that.

Let’s start here.  Let’s parse out the three things people are talking about, generally, when they discuss forgiveness.

I think all of those things get wrapped up under the umbrella of forgiveness and that makes for some confusion and angst.

Let’s simplify.  We can take one off the table right away.  Absolution is way the hell above our pay grade and not even close to our job, so we can let that one go.

I think a lot of the time when someone asks for forgiveness they MEAN absolution.  The thing about forgiveness, though, is that it does not always impact the person being forgiven.  There are people I’ve forgiven who are blithely unaware of that fact.  That’s because forgiveness is not necessarily about the person who caused the harm.

Forgiveness does NOT mean saying that what happened is okay and that the other person doesn’t need to have remorse or make amends or restitution or pay consequences. I remember feeling like I almost didn’t want to be okay because if I was, then it meant what happened wasn’t that big a deal.  Like it was a get out of jail card for the person who harmed me.  That I should be over it.

Forgiveness does not mitigate or minimize or negate your pain or trauma.

Forgiveness does not necessarily entail reconciliation.  You can forgive someone and decide you cannot have them in your life for one reason or another.  No one is entitled to that access and frankly, I do not believe there can be real reconciliation in the absence of justice.  Now, justice can look like more than one thing.  We get stuck in a punitive, penal system idea of justice, but the truth is that rarely happens and often doesn’t bring the peace and serenity we think it will.

Yes, forgiveness can be offered to someone who has harmed you.  That is an act of mercy, a gift- and gifts are ALWAYS OPTIONAL.  If it’s mandatory, it’s not a gift.  That’s not how gifts work.

I have forgiven some people for their roles in my abuse and the aftermath, but they are not welcome in my life.

Forgiveness is a choice.  And usually not a one-off.  Sometimes forgiveness is a daily decision.  I do so love things to be efficient, but I have found that most things in my life worth anything are a practice.  The fact that this is almost always true does not keep it from being unspeakably annoying.

And forgiveness is not something that can be forced or even ASKED of someone, really.

The other day I got a text from a friend.  She’s received a package in the mail from a relative who is distressed at the rift in their family and wants her to FIX IT.  This relative really wants things to be nice again.

Please God, deliver us from the nice people.

That niceness, though, would involve my friend pretending that she’d not suffered long term, violent sexual abuse in her family- and we can all agree that’s slightly problematic.

The package contained the following… gifts: 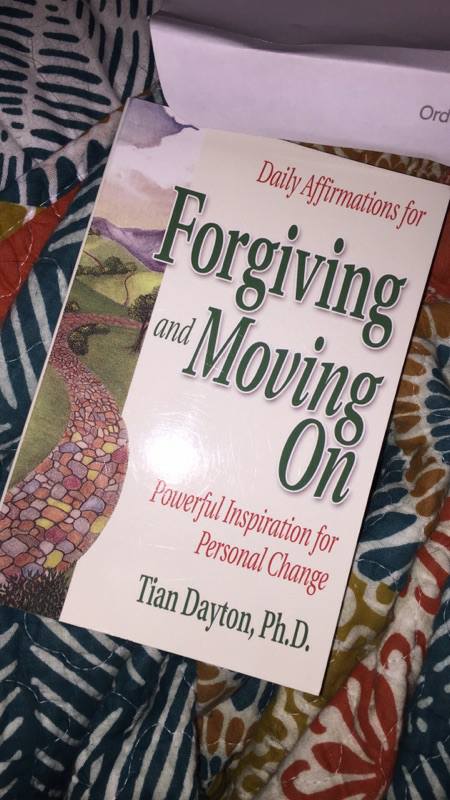 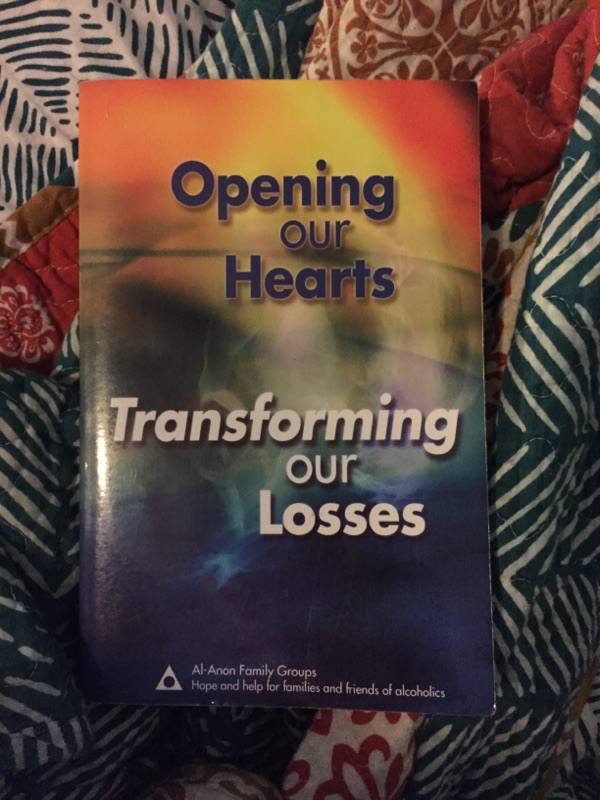 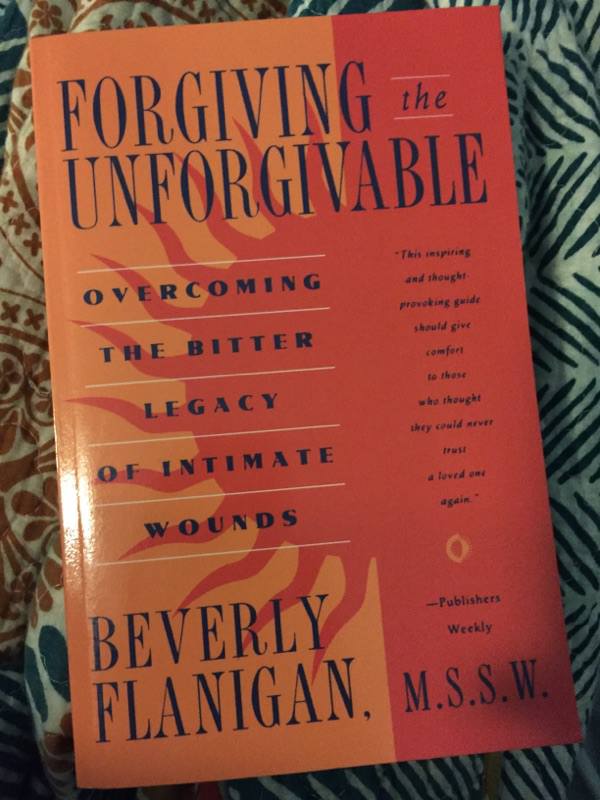 I suggested she continue this super fun book-exchange with the following gift in kind: 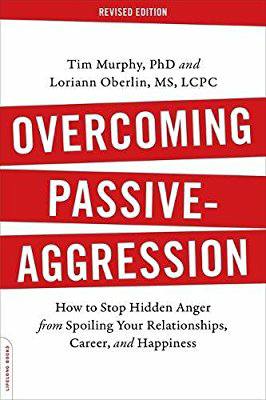 Anything can be unforgivable and anything can be forgivable because forgiveness is always a CHOICE.  It is a decision.  It is not some emotion what washes over us as we smile beatifically.  It cannot be earned or demanded.

When we forgive it is a conscious decision to lay down anger and resentment, and sometimes our anger and resentment is comfortable or it serves us in some way.  I’ve had stretches in my life when my anger kept me going because my only other option at the time was despair.  My anger was fuel, but the kind that burns really hot and really fast. It’s not sustainable- at least not for me.  But in that space, forgiveness does not seem possible- and maybe it’s not.  I find myself more able to forgive when the acute pain has lessened its grip on me.  It eases a bit, and then I am able to lay the rest down.

The truth is, my friend could forgive her abuser and his enablers and things still wouldn’t be nice because all forgiveness means is that someone has decided not to give valuable real estate in their mind or heart to anger and resentment.  That’s it.  And maybe sometimes in order to achieve that state some serious distance is necessary.  The rift might actually be a necessary component of her forgiveness.  She is the ONLY one who gets to decide that.

The only person who deserves the act of forgiveness is the person who has been harmed. YOU. You deserve to forgive because carrying the weight of all that pain and hurt and anger is too much.  It’s just too much, and it keeps you a prisoner of whatever harm was done to you forever- and you don’t deserve that.

But it’s okay if you’re not there.  You don’t have to be there. Yet.