What it is you think I should 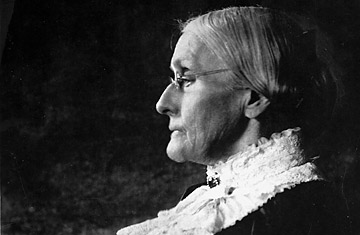 I spent Thanksgiving in New York with my Favorite’s family. On Saturday, a few of us went into Rochester and visited Susan B. Anthony’s home, which has been turned into a museum.

Susan B. Anthony was arrested for voting while being a female. Seriously. 143 years ago. Arrested, essentially, for expressing her opinion at the ballot box. In the months leading up to her trial, Susan went to every town and village in the court’s jurisdiction and gave the same speech, “Is it a Crime for a Citizen of the United States to Vote?” As the trial neared, the authorities feared she’d tainted the jury pool, so they decided to move the trial to another county. Susan visited every single town and village in THAT county and gave the same speech.

At her trial, she was not permitted to testify on her own behalf. The jury of her peers- you know, twelve white men- never had a chance to deliberate. The judge handed them a piece of paper stating that she (who was not permitted to BE a witness) was not a credible witness, and they were to find her guilty.

Her last job had been as a schoolteacher, where she earned $2 a week- so basically, she was fined almost a full year’s salary.

She stood, announced that she would never pay it.  Then she gave a speech, which I believe went a little something like, “Is it a Crime for a Citizen of the United States to Vote?” in front of a courtroom full of reporters from around the country, ensuring her views a national platform.

She never paid. Not one penny.

The postcard I bought in the gift store indicated the “B” in Susan B. Anthony stands for BADASS.

I stood in the front parlor as the docent told us that story and fought back tears. Susan B. Anthony, Elizabeth Cady Stanton, Ida B Wells and the many suffragists who stood alongside them, fought long and hard for me to have a voice. They were beaten, and jailed, force fed, and reviled for me and you and every other woman who ever exercised her right to vote, or keep her own money, retain custody of her children after divorce, be in charge of her own body- all those things to which we feel entitled, when we even bother to consider them.

The museum had some of Ms. Anthony’s original belongings, including one of her signature outfits- a sensible black dress and her ever present alligator purse in which she carried, for the rest of her life, a copy of her arrest warrant.

It was interesting timing going there, as I was in the middle of writing a post about the Dixie Chicks. It was something I’d had in the works for some time- even before they announced they were reuniting. It might seem a little odd, but I stood there in Susan’s office- the headquarters of the women’s suffrage movement- and thought of Natalie, Martie and Emily.

I think Susan would have liked them. I think she’d have appreciated their fire, but mostly I think she’d have been happy to see them holding fast to the rights and privileges she and our foremothers fought for so valiantly. They devoted their lives for my right to spout my opinion on political matters wherever and whenever I want- including on this blog- and then to back them up at the ballot box.

I’ve spent most of my life avoiding conflict when I could.  SO not a badass.  I’m good at making nice.  I don’t like upsetting people.  If I feel as though I’ve made a mistake, broken a rule or hurt someone, I’m quick to apologize, quick to try and make it right. That’s not necessarily a bad trait, but I shied away from battles that were worth fighting.  I’m not proud of that.

When I saw on Facebook the other day that the Dixie Chicks are going back on tour in 2016 it made me exceedingly happy. I love them.

Do you remember on the eve of the invasion of Iraq, when Natalie Maines (the Dixie Chicks’ lead singer) made what, in hindsight, were some not-so-controversial remarks that caused a firestorm?  In the aftermath, they did an interview with Diane Sawyer.  I’m sure their publicist was hoping it would smooth things over- that it would offer them a chance to explain themselves and extend an olive branch to country music fans who were offended.

Now, I normally like Ms. Sawyer just fine, but that interview…  It seemed as though she was desperately trying to get them to turn on one another, and apologize- and they were having none of it.  I’ll give her the benefit of the doubt.  These three spectacularly talented young women had gone from being wildly successful to having their records burned, their lives threatened, and being banned on country radio- all because they spoke what we all now know to be the truth.  That there were no weapons of mass destruction, and we were in Iraq for other reasons entirely.

Maybe she was trying to give them an out.  Maybe she thought she was helping.  I have to say, though, it really bothered me.  To have a powerful female journalist trying so hard to get three young women to apologize for having an opinion really rubbed me the wrong way.

I watched them stand their ground, and do the hard, unpopular thing.  I was so PROUD of them.  The easiest thing in the world would have been to do a meek little mea culpa, bat their eyes, and pretend they didn’t know what they were talking about.  They could have been grateful at the opportunity to walk back their remarks, or rescind their opinions. They could have begged for forgiveness.

Emily and Martie could have turned on Natalie and said, “She doesn’t speak for us.”

Know what the best part was?  The CLOSEST Natalie came to apologizing was saying she wished she’d been more eloquent.  She was speaking off the cuff, and she wished she’d crafted her words more carefully.  That’s a writer, y’all.

I spent so many years knowing that “my place” was to shut up and smile.  In public, I was not to rock the boat or challenge anyone.  I was to wear my sensible little black dress and be supportive.

I do not know how I kept my mouth shut, and why it was that I felt the need to do so.  I mean, I know why others wanted me to not make waves or say what I thought, but why was I okay with it?  I have never, ever not been an opinionated person.  So why did I censor myself for so long?

I think it took stepping fully into my story and speaking my truth to figure it out.

When I was a little girl I told the truth.  I used my voice, and I paid a very, very high price for it.  People got really upset.  I lost the most important man in my life for speaking up. You don’t have to scratch too far down below the surface to understand why I hesitated to voice my opinions in my marriage and in life in general.

I could get really angry thinking about all of those years of making myself small- but at who?  It could only be myself.  I chose to silence myself.  I think it’s why I was so moved by not only Natalie using her voice, but of Emily and Martie lending theirs to the chorus. It’s why I cried in Susan B Anthony’s living room.  It’s also why I love this blog, and all of you.  I love to use my voice, and I love when you chime in.

When the Dixie Chicks go back on tour next year, you can bet I will be there, singing at the top of my lungs- maybe not ready to make nice, you know how I feel about that word, anyway- but ready to chime in and use the voice God gave me, and Susan fought for.  Like a badass.

For that, I’m grateful.  But don’t tell Ms. Anthony.

“Our Job is not to make young women grateful. It is to make them ungrateful so they keep going. Gratitude never radicalized anybody.”