“In order to succeed

we must first believe that we can.”

I have an app on my phone that tracks my sobriety time.  Every morning it gives me my month count and a little inspirational quote.  I got the one above a little while back. 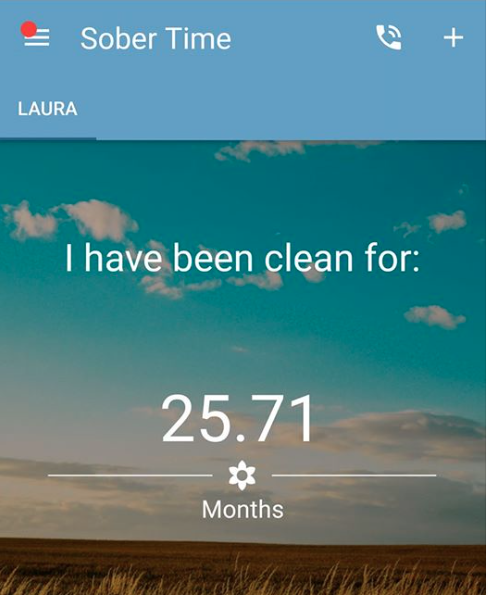 I was speaking the other night and I mentioned that while I was still drinking I never, ever really thought about getting sober. Not once.  Not really.  Not even when everything was hitting the fan and everyone was furious with me.  Not when the weight of people’s disappointment was crushing, not when I knew every relationship was in jeopardy.  Not even when I dragged my hungover ass to my first meeting.

I also did not spend much time contemplating learning to fly- which seemed about as likely.  I KNEW I could not stop drinking.  Knew it down to my bones.  I was sure of it. How could I possibly survive life without drinking? Alcohol was my SOLUTION to pain. It worked right up until it didn’t.  But I honestly didn’t see how I could move through the world without it.  I had no reference for doing that.

I get lots of emails from readers asking about healing from abuse- I get tons of great questions.

The other day I was asked by someone why it is that I choose to go back to the pain of my abuse over and over again, to delve back into that story.  It’s great that I’m in a good place with it, but having done that work why would I choose to still talk about it now?  Why not put it behind me and enjoy my life rather than revisit that pain over and over again?  Isn’t it giving my abuser power over my life, still?  And isn’t it bad for me?

See?  They’re great questions.  And I suppose questions that could also be asked about my writing about divorce and addiction.

First of all, if doing this work was bad for me I wouldn’t do it.  Full stop.

That’s a miracle and I want everyone to take a minute to witness that. BEHOLD- A HEALTHY BOUNDARY.  I’m thinking of having it bronzed.

I heard Glennon Doyle speak a while back and she said that what sobriety has come to mean to her is a decision never to betray herself again.  That resonated so deeply within me.

I choose me and in doing so, it becomes possible for me to be of service.  It’s that whole putting on your own oxygen mask thing.  Turns out there’s something to that.

As far as giving my abuser continued control over my life- well, I just couldn’t disagree more.

When I wasn’t telling my story, my abuser had complete control over my life.  I may not have been telling my story, but because our stories are nothing if not insistent, it was being told anyway- in addiction, eating disorders, anxiety, fearful parenting, toxic relationships, perfectionism, low self-esteem, insomnia… those things were ALL my story being told, because as William Shakespeare warned us, “The truth will out.”

I don’t know why I can revisit my trauma over and over again and not be harmed or triggered by it- and I’m not sure I care much.  I can.  Maybe I’ve simply told my story so many times at this point that it’s old hat.  I have integrated it as A fact of my life, so it is no longer THE fact of my life.

In recovery, we talk about building up a new history as a sober person.  It sort of means something like this: I know I can get through this next Christmas sober because I have already done it.  I’ve gotten through two Christmases sober. I now have that history, so, therefore, getting through Christmas without drinking is possible.  That’s what most people in recovery call a sober reference.

I am a massive dork, though- so, instead, I always refer to the Harry Potter and the Prisoner of Azkaban.  Obviously.

Remember the scene when Harry, having used the Time Turner, knows he can summon the Patronus because he has seen himself do it?  (Oh, should I have said, SPOILER ALERT?  Sorry.  Actually- NO, I’M NOT.  Read the books. See the movies.  We can’t all keep secrets forever so nothing is ruined for you, precious.  I’m trying to live my life here, dammit.)

Anyway, back to the Boy who Lived.  Fear couldn’t lie to him and tell him it was impossible because he had proof to the contrary.

He knew he could, so he did.

Anyhoo.  I also believe in using other people as sober/Harry Potter references.  I know I can stay sober during terrible times because I have seen other people do so, etc.  In my sober tribe I have seen people lose marriages, jobs, their health, even children, and remain sober through it- so I know it can be done.

When I was at Wild Goose I had the great good fortune to hear Reverend Otis Moss III speak.  That was almost a month ago now, and I’m pretty sure the trees in the mountains of North Carolina are still shaking.  He spoke of our responsibility to the next person, next generation- that our sole purpose here is to open a door, create a path- make possible some opportunity for whoever is coming up behind us.  Sometimes that means blazing a trail, and sometimes it just means being an example.  A reference of what’s possible.

After he spoke (and after I cleaned the mascara off my face) I went to his book signing.  I told him what his speech had called to mind for me, in my life.

When I was a freshman in college, I was in the dorm room next to mine watching Oprah with my girlfriends because it was 1989 and that was the law. Oprah was talking about her abuse and she was seemingly doing it without shame.  It made an enormous, life-changing impression on me.

Now, it’s not like I had some magical moment and my shame just fell away- I had to do the WORK.  And it’s not like I had the thought, “Ohmigosh- Oprah and I are so exactly alike- therefore, I can be shameless, too!”  I mean, she’s OPRAH.  But up until that moment, perched on the corner of that dorm bed, it had quite simply not occurred to me that was even an option to live without shame.

Oprah’s shamelessness became a reference for me- it allowed for the possibility of that freedom.

Those sober, Harry Potter/Oprah references are at least as important as the cautionary tales everyone always wants you to heed- the ones that tell you why it won’t work, why you can’t, what could happen.  I even hear survivors utter these words of warning or fear about the process of healing- as though leaning into that pain is too daunting.  That they can’t revisit their trauma- it’s too much.  Too painful.  Too treacherous.

I want to say,

You survived the THING.

You sure as HELL can survive

TALKING about the thing.”

That’s a big part of why I do what I do- because we need models of life after trauma.  We need to know that shamelessness, health, healing, and joy are possible.  We need to SEE it- because it seems impossible.  When you are stuck in it, you might as well obsess about learning to fly.

This I can promise you, sweet friends- the work will not be worse than the wound.

If you are here reading this and think you cannot survive doing the work around whatever is keeping to tethered to the past or to an unhealthy present, I’d gently remind you that if you weren’t a surviving badass you WOULD NOT BE HERE. I post it as a reminder on Say It, Survivor all the time- 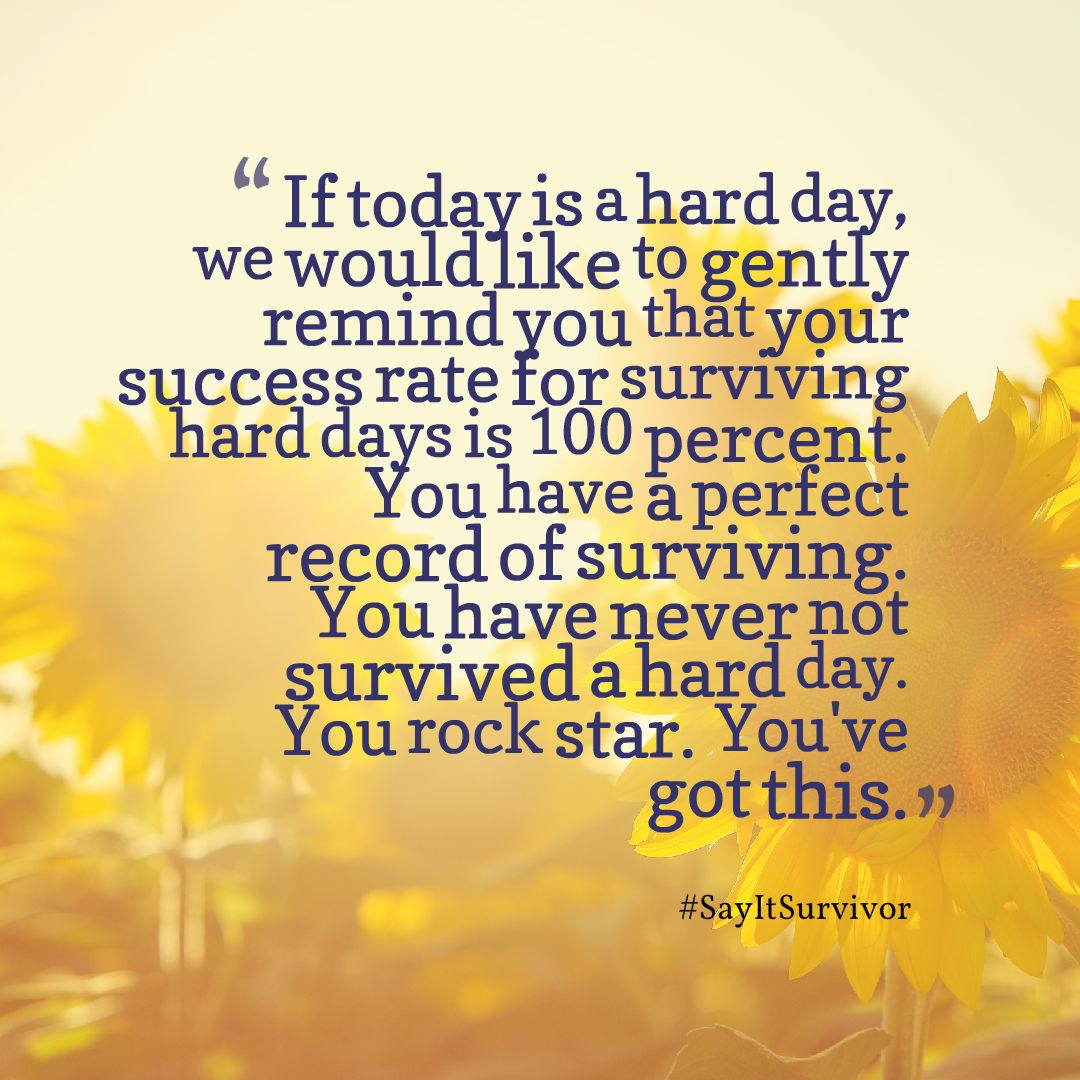 It can all get so much better.  It can.  It’s hard work, but not harder than where you’ve been.  If today is a super hard day, think back to what you believed about your last super hard day.  It didn’t feel like you could get through it, right?  But here you are.  Having gotten through it.  That’s some serious badassery.

Allow for the possibility that if you do the work, if you sit still for the pain, that you will come out the other side with a new story.  And, quite possibly, the ability to fly.

“There is freedom waiting for you,
On the breezes of the sky,
And you ask “What if I fall?”
Oh but my darling,
What if you fly?”