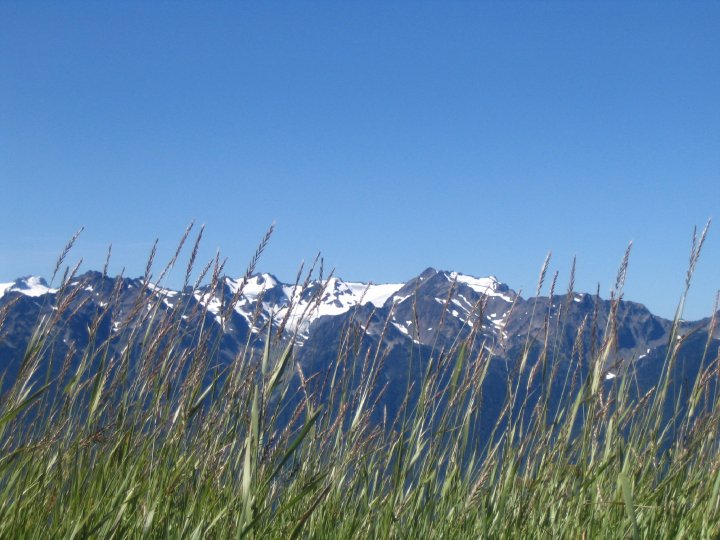 I lived in the Seattle area for nearly eleven years.  If you haven’t been to the Pacific Northwest you should go- but maybe wait until August.  The PNW is always beautiful, all of the time.  The trees are impossibly tall, everything stays green year round, but there are about nine solid months of gloom every year.

The weather is typically gorgeous in August- mid-seventies to eighty.  Dry.  Sunny.  That is a great reason to postpone your jaunt- but not why I recommend it.

Mountains.  Mountains are the difference between Washington state being a lovely place and a spectacular place.  I lived in an area nestled between the Olympic range and the Cascade range.  A breathtaking view of Mount Rainier was never more than a fifteen-minute ride from my house on a clear day.  It always struck me how odd it was that a day being just a little overcast could hide such a massive mountain, but it could and did.

When our kids were little, we decided to take a day trip out to Mt. Rainier.  We learned a little about the mountain, we pointed it out to them when we were driving around. We talked about how huge it was and how hard it was to climb.  It’s about an hour and forty-five minutes from where we lived.  The kids were super excited.  As we got about halfway there the views of the mountain got insanely good.  So big.  So magnificent.

Then it kind of disappeared.

We pulled into the National Park, drove for a bit.  Our daughter fell asleep.  We parked, got out, and went for a little hike.  We were admiring the trees and the hanging moss. The mineral pools, the wildlife.  My little girl was getting cranky and eventually dissolved into tears.  “What’s wrong?”  I asked.  “YOU SAID WE WERE GOING TO A MOUNTAIN!”

We were on it, friends.

A while back, I read a blog post that quoted Nadia Bolz-Weber who recommends “writing out of a scar, instead of a wound.”

As I am wont to do when someone’s words cause the little hairs on the back of my neck to rise, I Googled her and saw that she is featured on The Work of the People.  If you don’t know that website you should check it out, but only if you have several days to spare while you binge watch video after video- Brené Brown, Richard Rohr, Glennon Doyle Melton… So much goodness.

I can see it from both perspectives, I guess.  It depends on the intent.  The thing about scars is that they take time.

The virtues of writing from scars are many.  Time, distance, perspective.  Wisdom.   With time and distance, you have the chance to sort things out, integrate the experience into your life, and figure out what it means to you in the grand scheme of things.  You have a better grasp on what are the facts, and what are the feelings.  You can appreciate the enormity of something without being overwhelmed by it.

When you write from a wound, you don’t realize how big the traumatic event is compared to other things in your life, but how small it will seem when you are farther away from it. When you are in the middle of something, you have zero perspective.  It’s too big and you are too close. It is all you can see, so you cannot see it at all. It seems impossible that on some days, in the future, it won’t consume your every thought.

I think both kinds of writing have intrinsic value.  If I had written about my divorce in real time, it would have been colored with hopelessness.  I saw nothing redemptive.  I didn’t believe it could get better.  My pain was huge and raw and all consuming.  I couldn’t have offered any wisdom, but you would have felt what I was feeling, and if you were in a similar place you’d likely have felt less alone.  You’d have known that I understood.

There’s power in that.

I think being ready and being prepared are two different things.  If I had waited until I was ready to start this blog, you would not be reading this right now.  Ready, at least to me, means I have convinced myself that I have anticipated every pitfall, that I have no doubts, no fear- in short, that I am ensured success.  Well, I think that’s what it would mean to me. I’ve not actually ever been ready for anything major in my life.  Ever.

When I published He wrote it down and it went viral I was NOT prepared.  I was writing from an open wound.  I didn’t give myself five minutes to process the enormity of what had just happened before I wrote about it and sent it out into the world.

I was, in a word, unprepared for what came next.  I was utterly overwhelmed by the response to my essay, and went far down the rabbit hole.  It’s no one’s fault.  The reaction was unforeseeable.  The day before I posted it, I had a record high of 700 views in one day. The day after I posted it, I had 46,000.  The next day I had 86,000.

I felt a responsibility to read all of the comments as they came in, because I had clearly tapped into something and people were reacting viscerally.  They were telling their stories, sometimes for the first time.  I felt as though I needed to bear witness and validate, because I knew what it had meant to me to have someone do that.

Having said all that, I think it played out the way it was supposed to.  I think even me being undone was part of a bigger plan.  It is not always a bad thing to get broken down. It’s how you build muscle, actually.  When you lift weights, you are breaking down muscle, and when it repairs itself it comes back bigger, stronger.  That experience broke down my emotional muscles so that I could grow, and heal.

There is a rawness, an immediacy, to writing about something when the storm has yet to pass.  When you put into words what is happening, and the wind is still howling around you, and the rain is still pouring down, that energy is transmitted in your writing.  People feel it.  There is value and power in that.  There’s just seldom wisdom, and never any perspective.

If I were to write about Mount Rainier from my old neighborhood, I would write about how massive it is, but how it can disappear with the slightest cloud cover.  I would write about the way the sun reflects off of the snow at the peak and turns it bright pink at sunset, and what it feels like to come around a bend and see the mountain spring up before you like a jack-in-the-box sent from God- it’s always a surprise, somehow.  I could tell you facts and figures about how it’s actually a volcano, how people try and climb it every year and sometimes people die on it- and what they can do to try and ensure they survive the experience.

If I was on the mountain, I could tell you how green the air smells when you’re hiking the moss-covered paths.  I could tell you about the banana slugs and the shiny trails they leave, or the glacial pools with their eerie blue water, so cold they suck the oxygen out of your lungs.  I could tell you the peculiar joy of making a snowball on a hot sunny day, once you reach the snow line. I could tell you that in the late summer it is covered in sub-alpine meadow.  How you simply cannot see that what from miles away looks like a giant, barren rock is actually carpeted in tiny, colorful wildflowers.

You’d feel it and smell it.