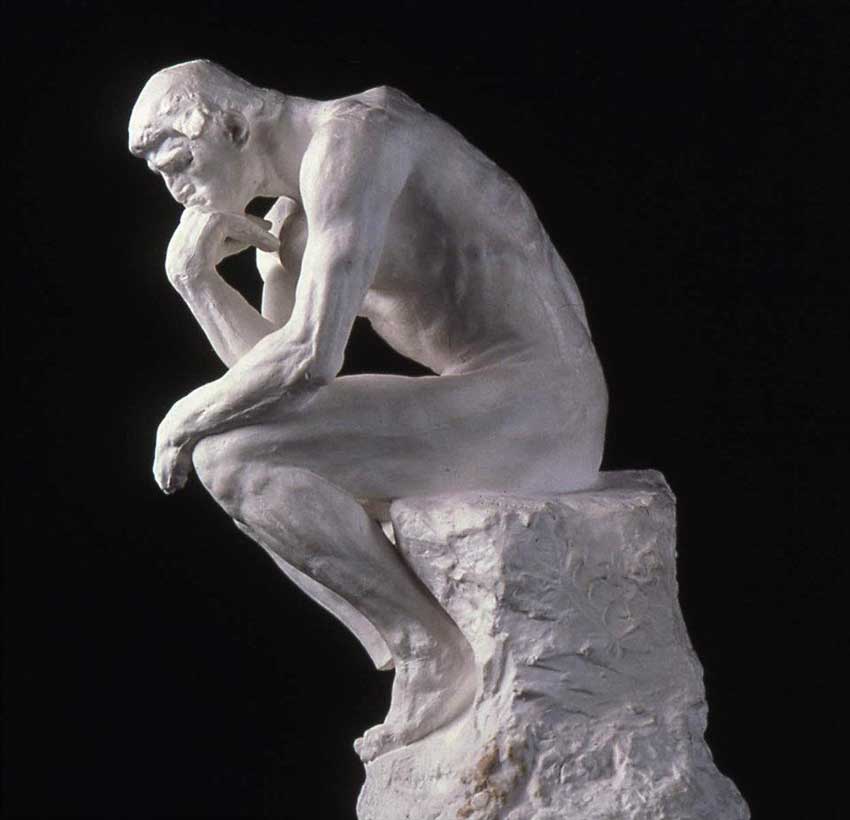 Your visions will become clear only when you can look into your own heart. Who looks outside, dreams; who looks inside, awakes.

My friend Alex recently sent me a blog written by a friend of hers that contained the line, “I could navel gaze for England.”  That left me chuckling all day.  Introspection as a competitive sport is something I could get behind.  Yay, sportsing!

Your mascot, brought to you by Rodin.

I am fairly well surrounded by people who are given to introspection, so I’m always a little taken aback by people who are fundamentally NOT.  I am also a little jealous, because so much of it is tedious, frankly.  I mean, I couldn’t do what I do without it.  Creative non-fiction requires you to survey the outside world and then bring it back inside to your mind and heart and make connections.

Sometimes I ponder what it must be like to be unencumbered by self-reflection, and I think, “That must be nice.”  but then I reconsider, because… Donald Trump.

Are you guys watching Orphan Black?  I’m about to reference something from season 3, so if you are planning on watching it bookmark this and come back when you are done.  That might be next year because season 3 just finished and I don’t know when it’ll be available.  These are the trials we face.

There is a character on that show that I…what’s the word?  It’s more complicated than love. Helena is, in turn, terrifying, heartbreaking and hilarious.  She might be the most compelling character on television right now.  Well, her or Cookie from Empire.

In season three, there is a story arc in which Helena is kept company by a talking scorpion.  Stay with me.  She’s imprisoned, and the scorpion is her only companion.  Helena is a tetch crazypants.  S’alright.  ANYWAY. The scorpion is telling her things about her life, challenging her assumptions, making recommendations…  She calls the scorpion Pupok.  Naturally. 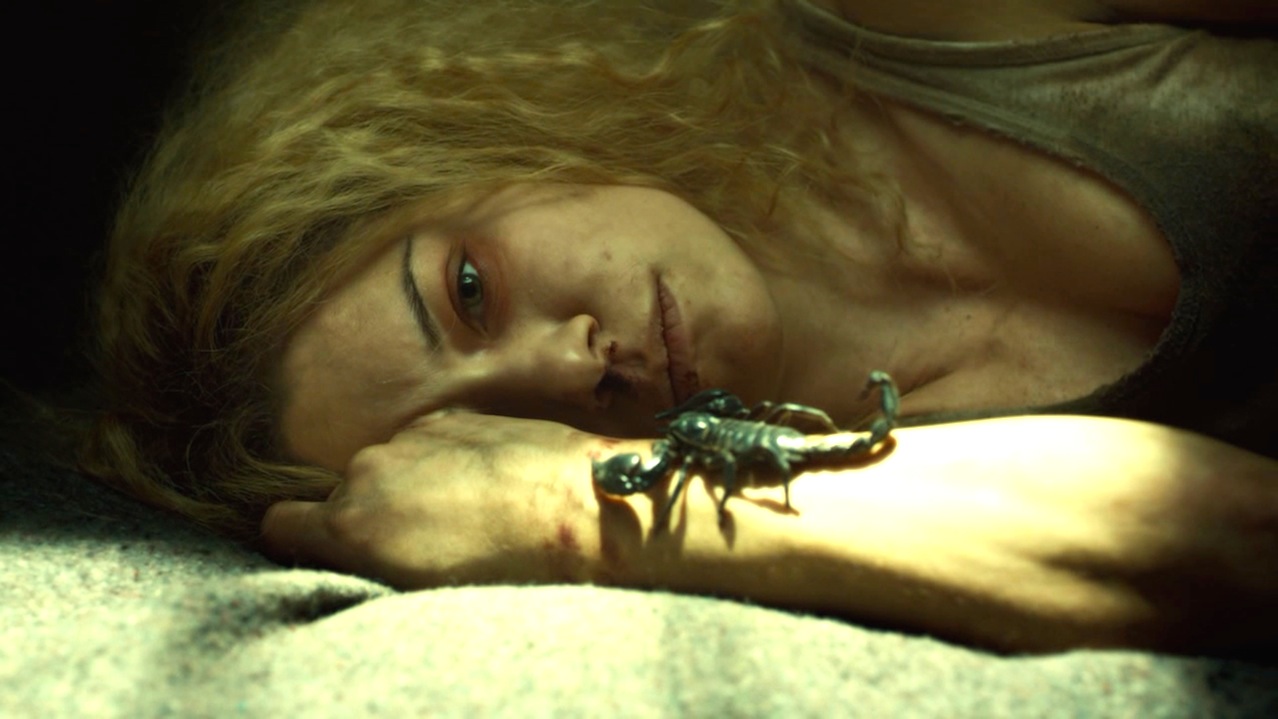 The thing is, though, the scorpion is lying or telling half-truths a lot of the time.  She is getting bad advice from that little arthropod.

At this point, I’d like you all to sit down because I am about to drop a wisdom bombshell on you. The scorpion is a METAPHOR.  I know, right???

Helena is not inclined to be introspective- she is very much a reactionary character when you first meet her.  But she is growing.  She has, for the first time in her trauma filled life, experienced love. So, she sits imprisoned, reflecting on things she doesn’t understand, and looking down at her little creepy bug friend.

It is at this time I will let you in on a  little treasure of a fact.  Pupok is the Ukranian word for belly button.  It’s freaking delightful writing, is what it is.  I want to kiss whoever came up with that. On the lips.

Now, when Helena finds out that she has been the recipient of some bad advice that threatens those she loves, she handles it.  It’s a whole thing.  But she, in a manner of speaking, stops listening.

Introspection can be a great thing.  Thinking about why we do the things we do, what effect they have on our lives and the lives of others is a necessary part of growth.  The people I know who do not do this tend to be stuck, repeating the same mistakes over and over, because they refuse to learn from them.

The thing is, though, if you aren’t healthy, too much introspection can be destructive.  Think of what they call, in fiction, an unreliable narrator.  That’s when the person telling the story cannot be trusted- when you might not be getting all the facts.

Pupok was an unreliable narrator.  I have been at times in my life, too.  It’s a conundrum.   This humaning thing is not easy.

It reminds me of a piece I wrote for a creative writing class in college.  I recently came upon a folder of my work from that time.  Bless my heart.  The angst!

ANYWAY.  I’ve no earthly idea what inspired me to write it.  It may have been nothing more than the fact that my friend Tammy and I really loved cows.  Truly.  It was a thing.  I think, though, that I may have accidentally stumbled on some insight about myself and my tendency to worry about things over which I have no control.

Be kind.  I was eighteen, and a complete knucklehead.

I was walking along the dusty footpath when I met Myself coming from the opposite direction.  I looked tired and frustrated and tears streaked in rivulets down my grime smeared face.  “What’s the problem?” I asked Myself, “Why do I look so upset?”  I replied to Myself, “It’s going to rain, and the cows are refusing to lay down.”  I looked toward the arid field and, indeed, the cows were standing around in peaceful, nonchalant groups as though they had not a care in the world.  “But it’s not raining,” I exclaimed, “the sun is high and strong and the skies are clear.  It’s a beautiful day!” “I’m aware of that!” my other Self snapped, “But it’s going to rain someday and they’ll be caught completely unprepared.”  I immediately grasped the enormity of the problem at hand and morosely trudged down the path, beside Myself with worry.

Truly, it was probably just about cows, given that I am just now addressing my inclination to worry about things above my pay grade lo these 26 years later.

I guess my point is this- simply because I am given to introspection doesn’t always mean I have had great insight into my own issues or behavior.  I think self-reflection is great and necessary, but sometimes the mirror you are peering into is of the fun-house variety.  Sometimes you need someone outside yourself to hold up a clearer mirror FOR you, to challenge that unreliable narrator in your head.  I think to be truly healthy it needs to be AND not OR.  You need to examine your behavior and reflect on your life, and you need the perspective of people outside yourself as well.  And I don’t mean a mini land lobster- I mean ACTUAL other humans who know you well enough to see the truth, and love you enough to speak it, even when it’s hard.