We know what the world wants from us.

We know we must decide whether to stay small, quiet and uncomplicated or

allow ourselves to grow as big,

loud and complex as we were made to be.

Every girl must decide

whether to be true to herself

or be true to the world.

Every girl must decide

whether to settle for adoration

or fight for love.

A few weeks ago I received my ARC copy of Glennon Doyle Melton’s new book, Love Warrior.  I was a little excited. 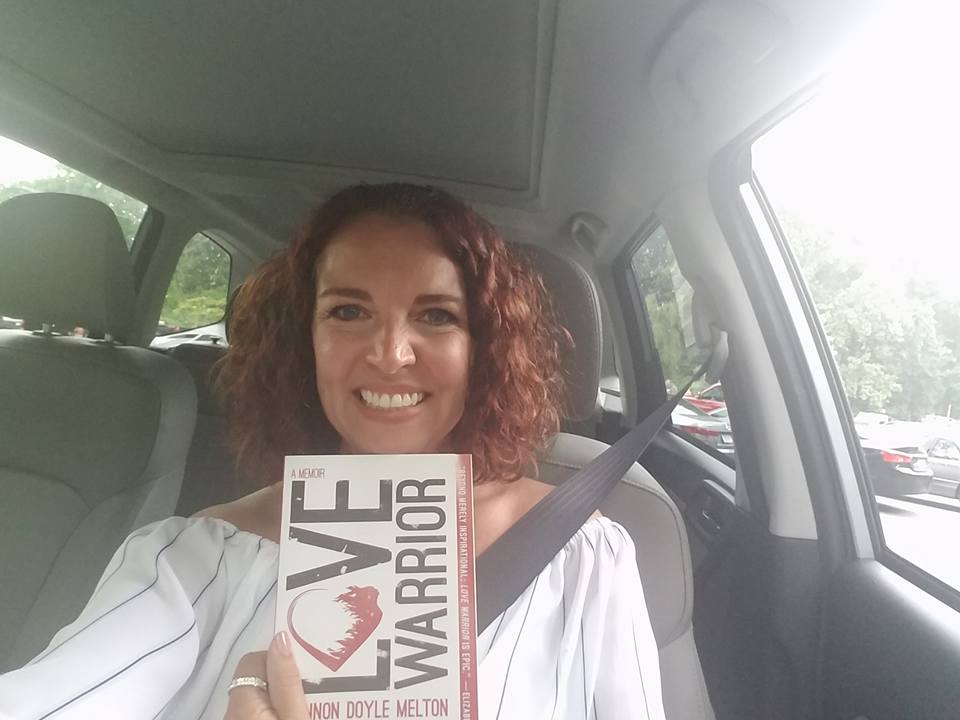 I was also nervous. I knew it was going to challenge me in some ways, and I wasn’t altogether looking forward to AFGO.

You guys.  THIS BOOK.  This may be the bravest book I’ve ever read.  It required bravery from a whole family.  I don’t know many people who would have the integrity to write something as unflinchingly honest and contemplative as this one is. The wisdom in this book is hard-won.  It made me want to be a better writer, a better truth-teller.  A better woman.

This book is about many things, or maybe just one.  It’s about body image issues, spirit/mind/body connection – which was, somewhat laughably, my college credo- addiction, sex, intimacy, connection, marriage- but ultimately, LOVE.  This is a love story, but perhaps not the kind you think.

One of the things I’ve been thinking about since reading this book (twice) is how helpful I believe it will be for survivors of sexual trauma.  I will be adding it to the list of resources we give to all participants at Say It, Survivor workshops.  Child sexual abuse is not part of Glennon’s story, but her relationship with her body and therefore with sex is what we hear from survivors time and time again.  That disconnect.  That seeing our bodies at best as “other” and at worst as the enemy.

Early in the book, the author refers to “the first time sex happened to me.”  I had to put the book down for a little minute when I read that.

For most of my life, I had that disconnect.  I floated away somewhere else during sex.  My body was not a safe neighborhood as far as I was concerned.  A crime scene, actually- so I wasn’t about to hang around.  I’d detach, not really be in it.  The thing about that is, it turns physical intimacy into something being done TO you instead of WITH you and for a survivor of sexual trauma that is seriously dangerous territory.  You feel like a means to an end.  I mean, what is sexual abuse if not masturbation with a victim?  In crimes of sexual assault sex is the WEAPON.

And for someone who is terrified not to be in control, the notion of physical abandon was terrifying.  That requires real vulnerability.  Also, I knew men were inherently dangerous.  Even the ones I loved.  Maybe especially them.  But I knew what to do and what to say.  I’d been taught early and well- I knew what my role was.  And I resented the hell out of it.

You don’t get to the other side of that without some seriously hard work.

This is a love story.  Oh, sweet friends, YES- it most certainly is.  This is a story of a woman deciding to love herself enough to do the hard and sacred work of healing psychic and spiritual wounds that were encouraging her to live small.  This is a love story of a woman learning to tune out those voices that come at us from every side and try to harangue us into submission.

You can listen to those messages.  You can take them in.  You can be small and quiet and pretty and nice.  Pretty and nice are my two least favorite words.  You’ll be rewarded, sure- but you might die, too.  Maybe not all at once.  Just a little bit, every day.

It’s about the mixed up messages boys get, too.  The world we live in encourages girls to keep their bodies at a distance and boys to partition off their minds.  Sex is either painted as purely a matter of the heart or the body- not both- so there are disconnects all around.  Girls go away in their heads, and boys try to pretend it’s purely a physical act.  Both are damaging misperceptions.

This book may have been born out of a marital crisis but it isn’t a ‘how to fix your marriage’ book, though I am sure some will try and frame it that way.  This isn’t a tell-all, shame the wrong-doer memoir.  Not even close.

This is a story of a whole family showing up for each other and trying to do the next right thing.  This is people engaging in love, the verb.  And it’s a family telling the truth about it.  There’re all kinds of bravery in play in the telling of this story.

I remember an essay Glennon wrote for her first book, Carry On, Warrior – it was entitled Easter.  I was a little undone by it.  It was written in the early days of reconciliation and work after the author learned her marriage was not quite what she thought.  It was hopeful and achingly beautiful.  I never got an Easter in my marriage, there was no re-growth.  No spring, with all its promise and newness.  I grieved that for a long time, but I see it differently now.  My marriage didn’t have a spring, but I did. The marriage didn’t grow back after that long winter, but I did.  And that’s hard, but it’s not bad.

Here’s the thing, though- when things grow back, sometimes they grow back differently.  There are environmental variables, there are warmer days, cooler nights, drought, downpours…

As some of you may know, Glennon shared that she and her husband Craig have decided to separate.  I want you to hear me when I say this- that does not do one single thing to undermine the message of this book.  It does not make it any less of a love story- in fact, it underscores it.  Love stories don’t look like just one thing.  A marriage ending in mutual respect and caring, with both people having shown up and done the hard and sacred work of healing is a much greater testament to love than two people staying together when it no longer works, setting aside what their hearts and souls need in the name of what the world and Disney deems a happily ever after.  We none of us owe anyone else a tidy ending.  Real love isn’t tidy.  It isn’t sentimental, and it isn’t ephemeral. It’s messy.  Muscular.

At the end of the day, we none of us can love anyone else well until we truly love ourselves.  Love Warrior was hard for me to read, and then I instantly re-read it.  I dog-eared pages, I underlined.  I texted friends quotes.

I’m doing a lot of hard work on myself right now.  Examining character defects, shining a light on things I would rather ignore.  I’m realizing that so many of the times I’ve done damage to others it’s been borne of my inability to authentically love myself.  I’ve spent so much of my life buying into the messages I was sold- letting other people tell my story.  That saying, “Hurt people hurt people?”  It’s true.

I still have so much work to do, but this book helped.  I think it’ll help you, too.  I’m betting you have a “ME too” moment or seven.  Do yourself a favor- if you haven’t already ordered it, do it now, and read it.  You’ll feel less alone when you’re done.